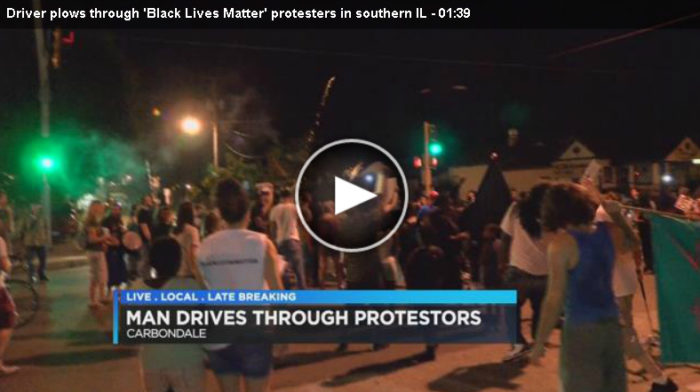 They were starting to swarm his vehicle! What other choice did he have?

An Illinois driver hurtled through a group of Black Lives Matter protesters who were blocking the highway near Carbondale, Illinois over the weekend. The man stopped his car and got out to say something to the protesters.

When the protesters swarmed his car he revved his engine and drove through their roadblock.

One protester got to ride on the man’s hood for several yards.

The driver of an SUV hurtled through a group of protesters during a “Black Lives Matters” march in southern Illinois on Sunday, July 10.

Demonstrators were blocking traffic along Illinois Route 13 at Marion Street when a man driving an SUV drove through protesters, which you can seen in a Facebook Live video captured by Heartland News.

As many as 100 protesters were setting off fireworks, chanting and marching through the streets of Carbondale, Ill. around 11 p.m. when the incident occurred.

In the video, you see the driver stop his vehicle just before the protesters. The driver gets out of his vehicle and shouts at protesters, gets back into his vehicle, revs his engine and then speeds through the group.

One person was on the hood of the vehicle for several hundred feet; however, it’s unclear if the person was injured. Witnesses at the scene claimed a child was also hit by the driver.