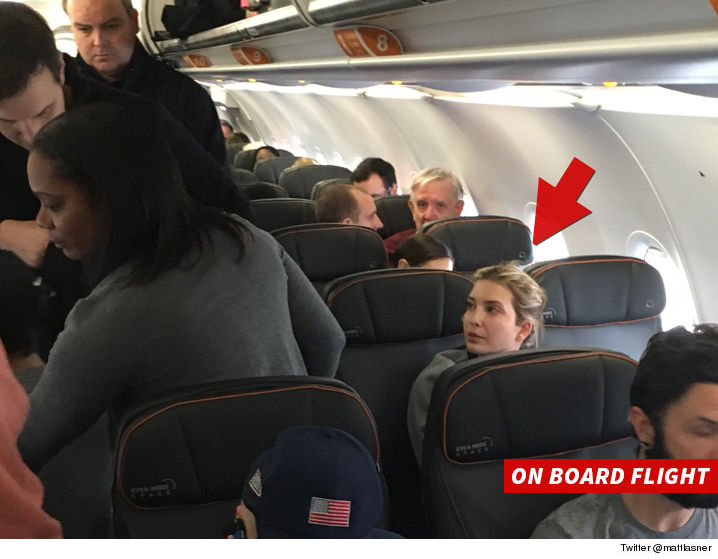 It doesn’t matter if Ivanka has the means to fly private, this man still can’t harass her and her children because she is on the same plane as him.

Ivanka Trump just had a bumpy start to her Xmas holiday … an out-of-control passenger on her flight began verbally berating her and “jeering” at her 3 kids.

Ivanka was on a JetBlue flight leaving JFK Thursday morning with her family when a passenger started screaming, “Your father is ruining the country.” The guy went on, “Why is she on our flight. She should be flying private.” The guy had his kid in his arms as he went on the tirade.

A passenger on the flight tells TMZ Ivanka ignored the guy and tried distracting her kids with crayons.

JetBlue personnel escorted the unruly passenger off the flight. As he was removed he screamed, “You’re kicking me off for expressing my opinion?!!”

BTW … Ivanka, her family and bunch of cousins were all in coach.

8:35 AM PT — JetBlue just released a statement, saying, “The decision to remove a customer from a flight is not taken lightly. If the crew determines that a customer is causing conflict on the aircraft, the customer will be asked to deplane, especially if the crew feels the situation runs the risk of escalation during flight. Our team worked to re-accommodate the party on the next available flight.”

7:48 AM PT — The husband of the unruly passenger tweeted an hour before the plane took off, “Ivanka and Jared at JFK T5, flying commercial. My husband chasing them down to harass them.”

Hunter College professor Matthew Lasner says his husband was the one Jet Blue kicked off the plane and tweeted pics of the incident:

Ivanka just before @JetBlue kicked us off our flight when a flt attendant overhead my husband expressing displeasure about flying w/ Trumps. pic.twitter.com/cGyIx2gsYt

— Matthew Lasner (@mattlasner) December 22, 2016
Ivanka and Jared on our flight. My husband expressed displeasure in a calm tone, JetBlue staff overheard, and they kicked us off the plane.

— Matthew Lasner (@mattlasner) December 22, 2016
Ivanka and Jared at JFK T5, flying commercial. My husband chasing them down to harass them. #banalityofevil

As Twitchy notes, you can delete the tweets, but screenshots are forever: