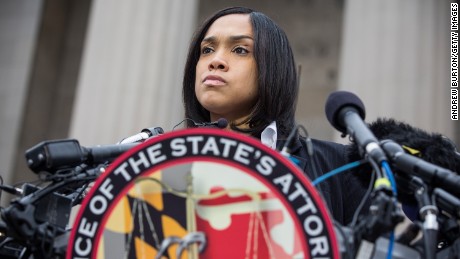 It doesn’t take a genius to realize that Marilyn Mosby was politically and personally motivated to bring these charges against the officers.

Baltimore State’s Attorney Marilyn Mosby is going from prosecutor to civil defendant in connection with the case of the death of Freddie Gray.

On Wednesday, Mosby announced that charges against three officers still facing trial were being dropped. Mosby gave only a statement, but had to leave without taking questions because five of the officers in the case have filed lawsuits against her.
Officers Garrett Miller, Edward Nero and William Porter as well as Sgt. Alicia White and Lt. Brian Rice are suing Mosby and Maj. Samuel Cogen of the Baltimore Sheriff’s Office. Cogen was the law enforcement officer who filed charging documents against the officers.
The lawsuits allege false arrest, false imprisonment, defamation or false light, and other assertions. They were filed in U.S. District Court in Maryland in 2015 in late April and early May around the time the officers were arrested.

Gray died in a hospital on April 19, 2015, a week after police stopped him on a Baltimore street. After his arrest, officers placed Gray in the back of a police van, which made several stops.

When the van arrived at the police station, Gray was unresponsive. His neck was broken and compressed, prosecutors said in court, comparing the spinal injury to those suffered after a dive into a shallow pool.
Rice and Nero had already been acquitted in separate bench trials. So had Officer Caesar Goodson, who apparently has not filed suit. Porter was the first to be tried but his case ended with the jury unable to reach a unanimous decision.
Mosby’s office dropped the charges against Miller, Porter and White on Wednesday.
An attorney for two of the officers said Wednesday that there were ulterior motives in charging the officers.
“Marilyn Mosby’s comments in her press conference today confirm that the charges brought against my clients, Sgt. Alicia White and Officer William Porter, as well as the other four officers, were politically motivated and not supported by evidence to establish probable cause,” Michael E. Glass said. More

New Jersey: While Arresting A Cop For Domestic Violence, Police Discover He’s Running A Meth Lab Too
May 18th, 2021 Sons of Liberty Media

Why is the CDC lying about outdoor covid transmission?
May 18th, 2021 DC Clothesline
SHARE