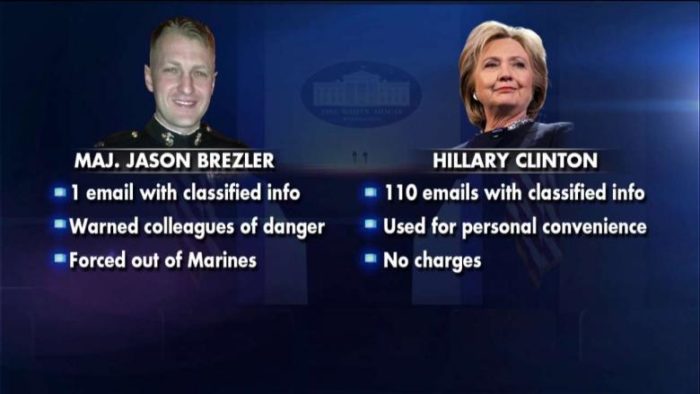 Double standard? Absolutely! This Marine was trying to save his fellow Marines but Hillary Clinton was just “careless” with her classified information.

Some are pointing back to this case of a U.S. Marine to highlight an alleged double standard involving Hillary Clinton’s mishandling of classified information.

Steve Doocy sat down this morning with an attorney for Jason Brezler, who was forced out of the service for using his private email account to send a warning to fellow Marines about an Afghan police chief’s alleged links to the Taliban.

One of the police chief’s servants would eventually attack the Marines, killing three of them in Afghanistan just weeks later.

Maj. Jason Brezler tried to warn about Afghan Police Chief Sarwar Jan, a known child predator with suspected ties to the Taliban. Jan was routinely allowed on military bases, but Brezler believed he should not be.

Brezler said he was trying to do the right thing by sending the warning, but it was issued through a personal email account.

Attorney Michael Bowe said that Brezler was determined to be unfit for service in the military by the Secretary of the Navy, a direct appointee of President Obama.

Bowe said that fellow Marines asked Brezler for “risk information” – which he had on his personal computer – via an urgent email. Brezler provided the information and self-reported it to his commanders.

Bowe said Brezler was punished for keeping the file on his computer after his deployment in Afghanistan ended. He said the Marine Corps allowed service members to use personal computers because they did not provide them.

Critics are now arguing that there is a different set of rules for the Clintons, also pointing to the case of Gen. David Petraeus, the former CIA director who was charged for revealing classified information to his biographer.

Defenders of Clinton maintain that she never knowingly mishandled classified information, however.