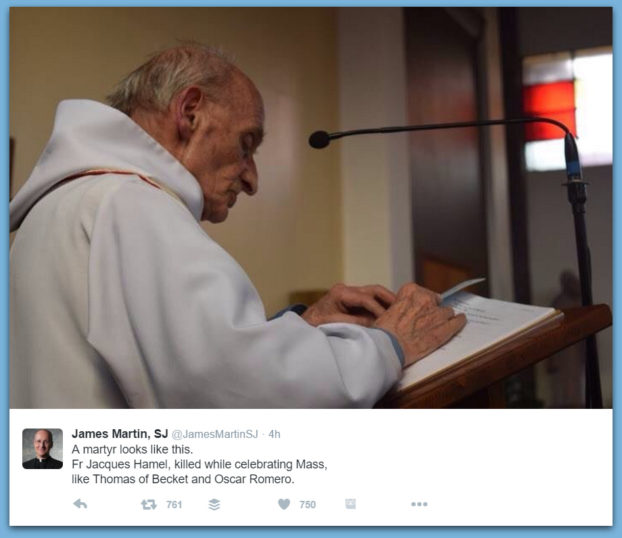 A martyr looks like this.
Fr Jacques Hamel, killed while celebrating Mass,
like Thomas of Becket and Oscar Romero. pic.twitter.com/bjIsbim4O7

Not only just murdered, but beheaded. They murdered a man of Christ, who did nothing but minister… If this isn’t a clarion call for the new Crusades, I don’t know what would be?

Here’s what we know about priest Jacques Hamel, who was killed in a church in #Normandy https://t.co/SziKLj7Q6a https://t.co/5DHYNOt8WA

Born in the same département of Seine-Maritime in 1930 and ordained in 1958, Hamel spent most of his working life in north-west France, including more than 30 years at St-Étienne. He celebrated 50 years in the clergy in 2008.

After officially retiring at 75, he had asked to remain in the parish and continue to help when necessary, the archdiocese of Rouen said. “This man was a good man,” said the president of the regional council, Hervé Morin.

Parishioners said they were devastated by the murder. “My family have been here for 35 years and we have always known him,” the manager of a beauty parlour down the road from the church told L’Express magazine.

DNC Reinforcing Fences After Protesters Arrested For Scaling Them