This one will disappear from the headlines very soon because it doesn’t fit the MSM’s narrative or advance their agenda because a good man with a gun stopped evil. See how well armed school security works vs. gun free zones?

President Donald Trump is all for arming teachers and school safety guards to protect students and teachers. He’s correct yet again!

100%FedUp: CNN and MSNBC backed off on coverage of the Maryland school shooting this morning after it was reported that an ARMED Resource Officer shot the shooter to end the incident. Yes! A good guy with a gun stopped a bad guy with a gun! Can you imagine if the officer hadn’t been there?

The mainstream media was all over this incident with comments about gun control and even mocking comments towards conservatives that “thoughts and prayers” weren’t answered after the Florida shooting. The anti-gun crowd was all over social media with taunting comments towards the NRA. Well, that was until the good news came out that a good guy with a gun stopped a bad guy with a gun:

According to WUSA9’s Peggy Fox, St. Mary’s County Sheriff Tim Cameron updated reporters after the incident had been contained.

Cameron stated that three students were injured in the incident, including the shooter himself, who was taken down by an armed school resource officer.

The SRO reportedly responded without hesitation and exchanged gunshots with the suspect before disarming him. He was not injured in the exchange. 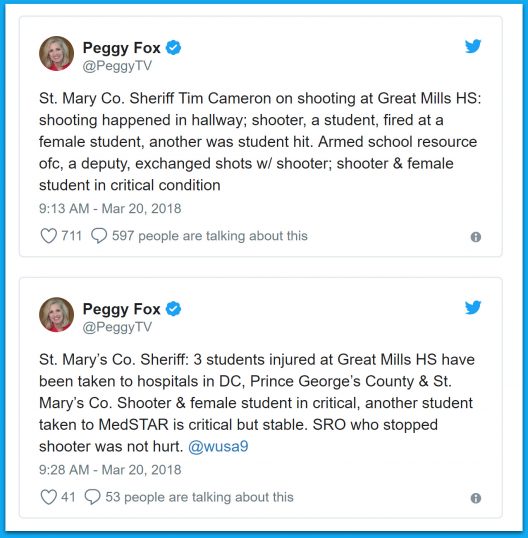 BREAKING: Media Silent on Maryland School Shooting After They Find Out Who Stopped the Shooter * https://t.co/hWsRJsjBaD https://t.co/PVxLZs4LaN pic.twitter.com/3GNuZz1qfO

BREAKING: Media Silent on Maryland School Shooting After They Find Out Who Stopped the Shooter https://t.co/V1g6PJoRD0#MarylandSchoolShooting

So a Good Guy with a gun stops a Bad Guy with a Gun and there’s barely any news coverage. CNN, where are you???? 👀https://t.co/5HM3Ytz7tH

This should be “On blast”. Maryland shooter stopped by a good guy with a gun. https://t.co/6Vpjw9Jz2b