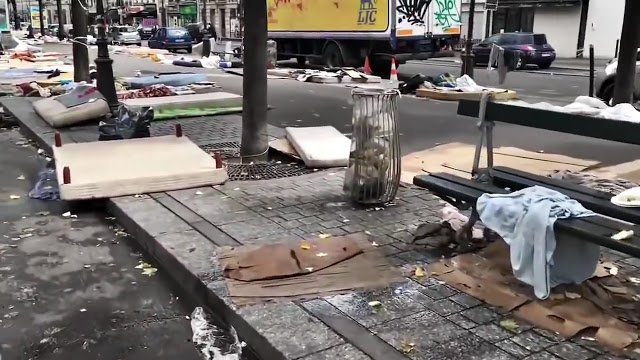 And this is what our country will look like if Hillary continues on Obama’s path letting in refugees like Paris did.

The Paris you know or remember from adverts or brochures no longer exists. While no part of Paris looks like the romantic Cliches in Hollywood movies, some districts now resemble post-apocalyptic scenes of a dystopian thriller. This footage, taken with a hidden camera by an anonymous Frenchman in the Avenue de Flandres, 19th Arrondissement, near the Stalingrad Metro Station in Paris as well as areas in close proximity, shows the devastating effects of uncontrolled illegal mass immigration of young African males into Europe.

If it weren’t for the somewhat working infrastructure, the scene might as well have been the setting of movie shooting – or a slum in Mogadishu. The streets are littered in garbage, the sidewalks are blocked with trash, junk and mattresses, thousands of African men claim the streets as their own – they sleep and live in tents like homeless people.

If no portable toilets are in reach, open urination and defecation are commonplace. Tens of thousands of homeless Illegal immigrants, undocumented or waiting for a decision of their asylum application, waste away trying to pass the time in the city. Although their prospects of being granted asylum as Africans are bleak, they’re hoping for a decision that would grant them an apartment, welfare and make France their new home.

The conditions are absolutely devastating. The police have given up trying to control these areas, the remaining French people avoid the areas at all cost, crime and rape is rampant, just recently mass brawls and riots made the news as fights broke out near the Stalingrad metro station.

If current trends continue and the French become minority in their own capital in even more areas, scenes like this might spread to areas frequented by tourists, forever changing the last romantic parts of Paris that match what most people have in mind when they think of the iconic city. More