When President Trump talks about draining the swamp, he is talking about politicians just like Maxine Waters.

Funny how her description of President Trump fits HER like a glove.

Maxine went ballistic and screamed, “You cannot impeach a woman of Congress!” 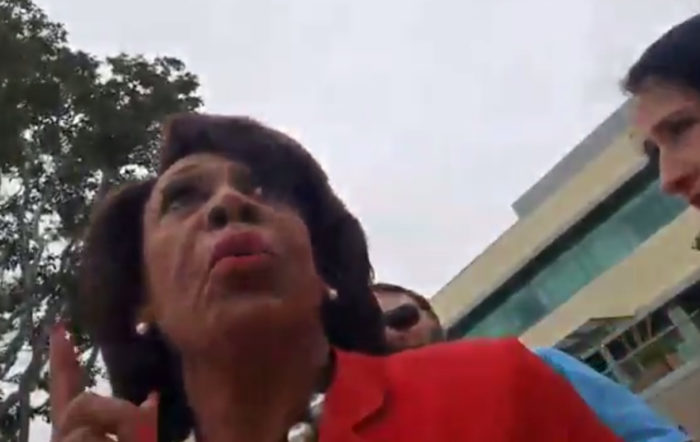 ALL CAUGHT ON VIDEO:

NEW: Constituent confronts Maxine Waters: “I’m going to work every day to make sure that [Trump] isn’t impeached and that you’re impeached.” pic.twitter.com/Bcv55wmpJx

TGP: Maxine Waters (D-CA) was confronted by a constituent who wasn’t too happy about her incessant calls for Trump’s impeachment. Maxine Waters immediately went into a tirade about Trump being a horrible person and a liar.

At the end of the video, the constituent calls for Maxine Waters’ impeachment and Waters responds with ‘You cannot impeach a woman of Congress!’

After a constituent confronted Maxine Waters and told her that she’s been emailing her and calling her office, Waters claimed she’s just so busy that she hardly has time to check her emails then asked the constituent what she wanted to talk about.

Constituent: “Well I just want to talk about your representation in Washington and our President as well.

Waters: “I can’t stand him! He’s the most horrible man I’ve ever seen in my life!”

Constituent: “I love my President.”

Waters: “I’m glad you do! Your President is a dishonorable, lying man. He mocked a journalist. I’ve never seen a grown man do that! He talked about grabbing women by the private parts. He’s lies everyday. He’s in bed with Putin and the Russians about oil! And everybody around him are allies with the Kremlin and with the Oligarchs of Russia. They’re gonna take us down!”

At this point, the constituent brought up former President Bill Clinton because of his sexual deviancy and Maxine Waters brushed it off. Then Maxine Waters said she’s going to work everyday until she gets President Trump impeached.

At this point, the constituent said that she’s going to work hard everyday to make sure that President Trump isn’t impeached, but that Maxine Waters gets impeached instead.