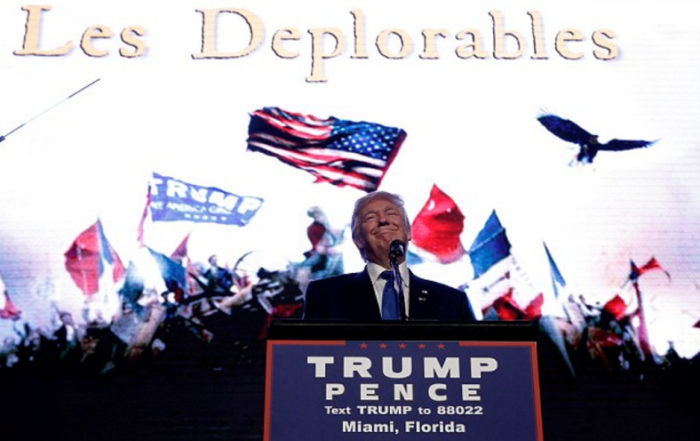 The media knows that unless they can generate some kind of controversy involving Trump, Hillary’s freefall will continue at warp speed. Newsrooms across the country are having mousey, shrill little reporters hyperventilating into paper bags while enroute to their safe spaces. Gotta love it.

Republican presidential nominee Donald Trump sent the media into a frenzy (again) on Friday by calling on his rival, Democratic Party presidential nominee Hillary Clinton to disarm her Secret Service detail and ‘see what happens to her.’ Trump made the comments at a rally in Miami where his entrance on stage played on Clinton’s recent ‘deplorables’ attack on Trump supporters.

Clinton is a hardline gun control advocate who has been continuously protected by armed federal or state law enforcement officers since the 1980s when she was First Lady of Arkansas.

It’s funny how the media is outraged at the prospect of an unarmed Hillary Clinton being vulnerable to being murdered yet oppose average citizens’ rights to protect themselves with firearms of their choice.

The New York Times reported (and editorialized) on Trump’s comments:

Once again raising the specter of violence against Hillary Clinton, Donald J. Trump on Friday evening recommended that her Secret Service detail voluntarily disarm to “see what happens to her” without armed protection.

He suggested that the Secret Service should stop protecting Mrs. Clinton because, Mr. Trump falsely claimed, she wants to “destroy your Second Amendment.”

Presidential nominees are protected at all times by heavily armed teams of Secret Service agents, some uniformed and some undercover, who are devoted to the candidates’ physical safety.

Mr. Trump’s comments were a provocative echo of widely condemned remarks he made at a meeting of the National Rifle Association in early August, when the Republican nominee suggested that gun rights supporters should rise up against Mrs. Clinton if she was elected to stop her from appointing judges who might favor stricter gun regulation.

“If she gets to pick her judges, nothing you can do, folks,” Mr. Trump said, as the crowd began to boo. He quickly added, “Although the Second Amendment people — maybe there is, I don’t know.”

But those gathered to hear him speak on Friday evening went wild at the suggestion that Mrs. Clinton be stripped of armed protection, interrupting Mr. Trump with cheers”…

For the second time in the campaign, Donald Trump has invoked the possibility of Hillary Clinton’s assassination https://t.co/sPtN4PUiex

“Trump once again “jokes” about someone murdering Hillary Clinton.” More