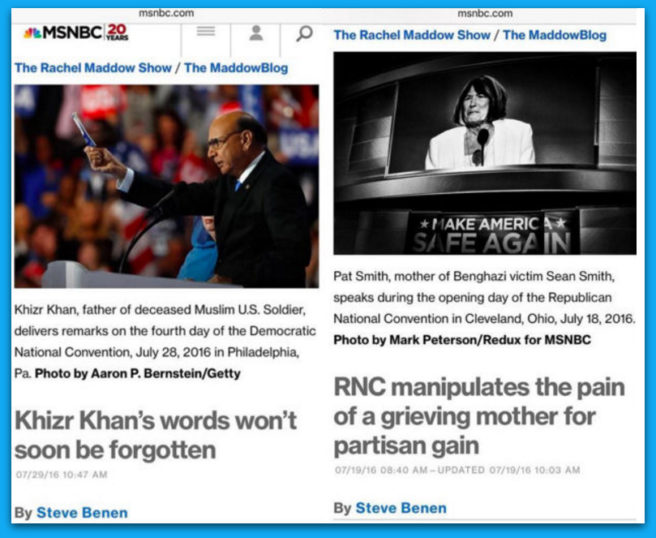 I feel bad for the parents losing their son. This doesn’t have anything to do with Trump wanting to follow our immigration laws or the vetting of refugees. That’s why I’m glad Trump gave it right back to them with both barrels. The Democrat media hacks are putting on a display perfect hypocrisy.

Not only did they accuse the RNC of exploiting Pat Smith, some actually attacked Pat Smith herself, saying how dare she attack or even question Hillary Clinton.

AM: The media found a new hero in the grieving parents of fallen soldier Humayun S.M. Khan, they delivered a scathing speech against Donald Trump at the DNC and are publicly mourning their son by campaigning for Hillary Clinton.

Despite that several statements in Khan’s speech were hyperbole and just well done political theater, the media has praised them as redefining American politics.

Yet when Pat Smith, the mother of a victim of the terrorist attack in Benghazi spoke she was fact checked and attacked by members of the mainstream media. Chris Matthews bashed Smith, calling her comments “a gross accusation” and said of the grieving widow “I don’t care what that woman felt.” More