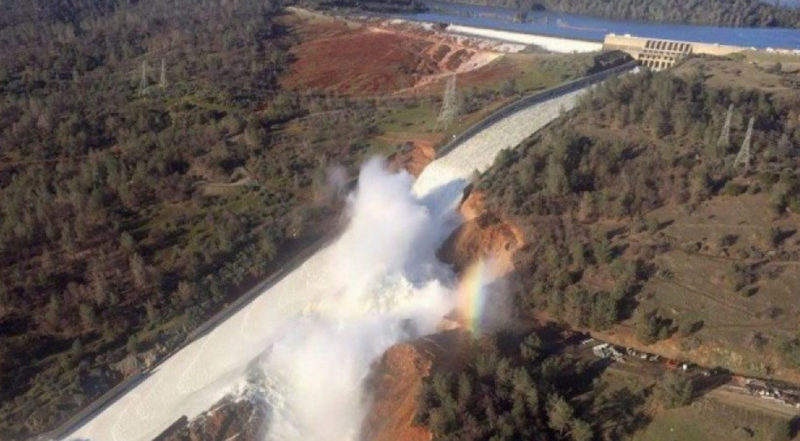 Why am I not surprised? When the reservoir was empty it was climate change, when it’s full it’s climate change! Everyone knows that dams have to be maintained on a regular basis. Jerry Brown chose to ignore repeated warnings. He instead poured countless thousands of dollars into benefits for illegals.

We all knew this was coming from the warm-mongers. If the Cornyfornians can blame the spillway collapse on global warming, maybe no one will notice that Governor Moonbeam spends $25 Billion per year on handouts to illegal aliens rather than remediation of critical infrastructure. The dam is over 50 years old and engineers have known of structural problems for over a decade.

A number of news outlets claim the near collapse of the Oroville dam’s emergency spillway in California is a glimpse of what man-made global warming could bring.

“Oroville Is a Warning for California Dams, as Climate Change Adds Stress,” the New York Times reported. “Broken California Dam Is a Sign of Emergencies to Come,” reads an article published in Scientific American, adding that “[c]limate change is leading to more extreme rainfalls that can overwhelm infrastructure.”

Nearly 200,000 Californians were evacuated from their homes Sunday after part of the Oroville dam’s main spillway collapsed, in turn causing the dam’s emergency spillway to reach the limit of what it can handle.
edwarming would bring more extreme rains that could damage infrastructure.

Roger Bales, an engineering professor with the University of California, Merced, said global warming was to blame for California’s unusually wet winter.

“It doesn’t take much warming to change snowstorms into rainstorms,” Bales told The Guardian. “With a warmer climate, we get these winter storms, which dump rain rather than snow.” More