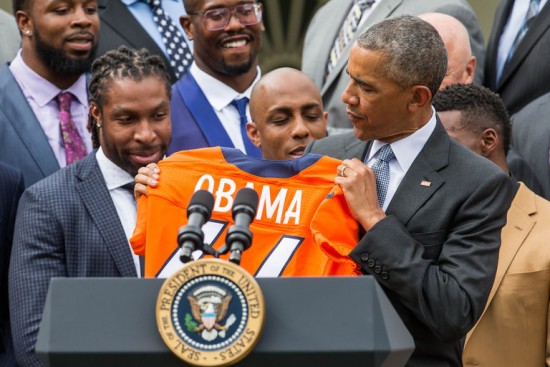 WASHINGTON —Nearly a year sometimes passes between a team winning a championship and its celebratory visit to the White House, but LeBron James and his fellow Cleveland Cavaliers will probably not have to wait that long.

In a congratulatory phone call to Cavaliers Coach Tyronn Lue on Thursday,President Obama made clear that he did not want his successor to get the honor of hosting the 2016 N.B.A. champions.

“I’m hoping you guys have a chance to come by the White House before I leave office,” Mr. Obama said, adding that he wanted to congratulate the team in person. It was an offer Mr. Lue quickly accepted.

“We’re definitely going to do that,” Mr. Lue said. “If it’s preseason or whatever, we’re going to schedule it so we can come when you’re in the White House, for sure.”

Air Force One travel is Mr. Obama’s favorite professional perk, but not far behind is the opportunity to welcome championship sports teams to the White House.

Five years ago on the South Lawn, Mr. Obama honored the 1985 Chicago Bears, the Super Bowl champions that season, in a makeup meeting. The Bears’ original White House visit had been canceled because of the Challenger space shuttle disaster.

“This is as much fun as I will have as president of the United States, right here,” Mr. Obama said of the team that had enthralled Chicago just as he adopted the Windy City and its sports franchises.

“I have to say, I’m so pleased to be able to host Peyton here at the White House before I left,” Mr. Obama said at a June 6 celebration for the Super Bowl champion Denver Broncos. He had already teased quarterback Peyton Manning about being in TV commercials for enough merchandise to “stock your whole household.” More