This is what a full-blown case of Trump Derangement Syndrome looks like. This politically deranged and hateful person is encouraging people to commit kidnapping and violence against the First Family and others. Why hasn’t he been arrested yet?

Academy Award-nominated actor and filmmaker Peter Fonda is calling for Barron Trump to be placed in a cage with pedophiles, children of ICE agents to be threatened, and Homeland Security Secretary Kirstjen Nielsen to be stripped naked and whipped in public. 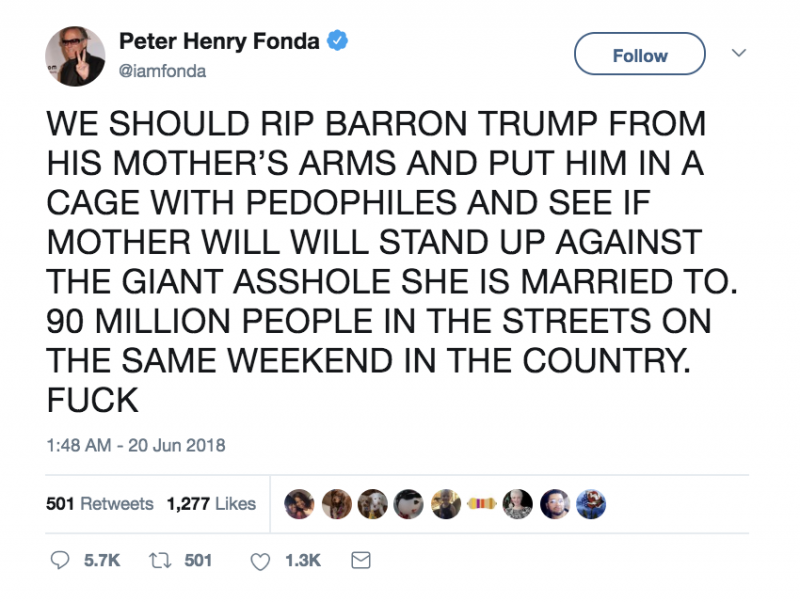 First Lady Melania Trump’s spokeswoman released a statement Wednesday that the Secret Service has been notified.

Spokesperson for the First Lady, Stephanie Grisham, has informed the Daily Caller that the Secret Service has been “notified” of the threat. “The tweet is sick and irresponsible and USSS has been notified,” Grisham said.

Threatening government officials of the United States is a felony.

There is now a boycott in place for his upcoming film Boundaries, which opens in theaters later this month.

All these left-wing wackos are going completely nuts…

Sickest and stupidest. He just guaranteed 65,000,000 Trump supporters will boycott his movie.

Fonda didn’t mention Valerie Jarrett so he will be celebrated by the left & get away with it..everyone should call Secret Service tell them do their dang job

We’ll see how many people show up to this doomed movie. Why isn’t his Twitter account not shut down?