First Lady Melania Trump will not be asked to wear a headscarf during her visit to Saudi Arabia this week. Got to love the FLOTUS, who in their right mind would have such a beauty cover up? Michelle and Hillary on the other hand…

Hillary Clinton wore it, Michelle Obama wore it, Melania Trump won’t wear it. Who represents freedom for women better? I think the answer is perfectly clear. 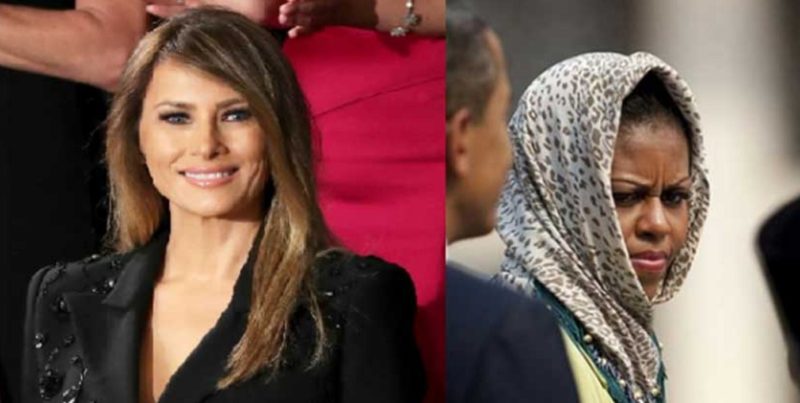 Covering herself with the quintessential symbol of misogyny is antithetical for any self-respecting western woman. We have fought long and hard for equality to ever grovel at the feet of a bunch of Saudi pigs who still want women to live in the 7th century.

Russia Today: America’s first lady has not been “ordered” to dress conservatively in Saudi Arabia, the country chosen by her husband as his first official overseas destination. Along with meetings on the US president’s itinerary, there will also reportedly be time for entertainment in the lavish Arab kingdom.

While the choice of the first country to be visited by Trump as America’s 45th president has been widely discussed in the media, a question has arisen whether there is a chance to see the US president’s wife covered in a traditionally strict Muslim attire.

Women in Saudi Arabia, including foreign visitors, are typically expected to wear a floor length dress – abaya, and a head scarf. However, when asked whether the US first lady would have to dress accordingly, a Saudi Arabia official said Riyadh “usually doesn’t demand” a specific dress-code, but rather “accepts suggestions.”

The Church and the Tribulation
January 16th, 2021 TCP News