If illegals gave Republicans votes, there would already be a wall…

A leaked memo reveals Democrats absolutely need DREAMers in order to have future electoral success. We already knew this to be true. The Democrats are fighting like hell for DACA recipients.

The memo, co-authored by former Clinton communications director Jennifer Palmieri, was sent around to allies calling on Democrats to “refuse to offer any votes for Republican spending bills that do not offer a fix for Dreamers and instead appropriate funds to deport them.”

Memo On Dreamers by Anonymous UFfj4cWO on Scribd

“The fight to protect Dreamers is not only a moral imperative, it is also a critical component of the Democratic Party’s future electoral success,” reads Palmieri’s memo, obtained by The Daily Caller News Foundation.

“If Democrats don’t try to do everything in their power to defend Dreamers, that will jeopardize Democrats’ electoral chances in 2018 and beyond,” reads the memo. “In short, the next few weeks will tell us a lot about the Democratic Party and its long-term electoral prospects.”

The DACA showdown is here.

In early September, President Trump announced an end to the Obama-era program that grants work permits to illegal immigrants who arrived in this country illegally with their lawbreaking parents or guardians.

Not only do these illegal aliens cost the American taxpayers billions of dollars, they are incredibly dangerous as well. Just like the Syrian ‘refugees’, we don’t know who they really are.

The median age of a DACA recipient is 23 years old. They are not hopeless babies and toddlers like the media would like you to believe.

President Trump MUST keep his campaign promise and deport DACA recipients or we can say goodbye to our voices.

Senator Chuck Schumer (D-NY) is so desperate to give DREAMERS amnesty that his entire Twitter account is dedicated to fighting for DACA recipients.

This is the Twitter account for a high ranking Democrat U.S. Senator. Let that sink in. Read more at TGP. 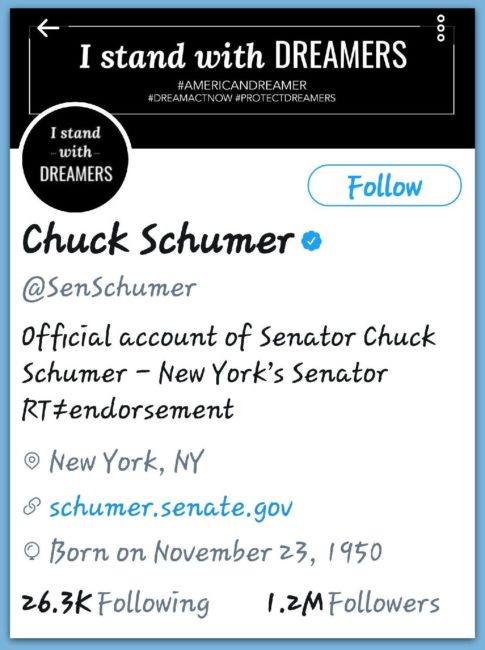 Never-Trumper Rich Lowry: "I Was Wrong About Trump" (Video)