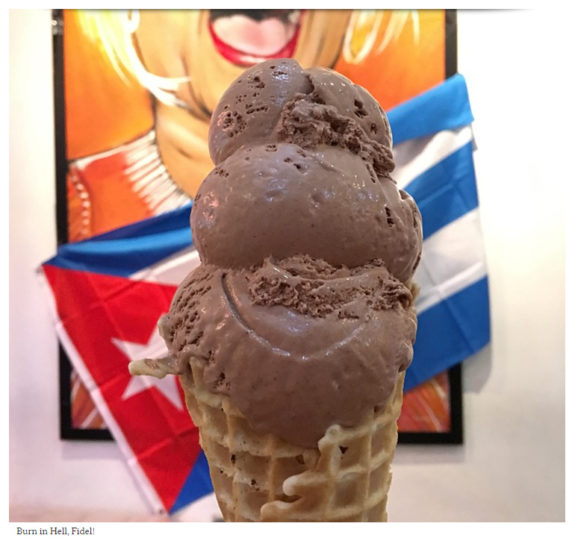 Quemar en el infierno Fidel. I’ll have a triple scoop… Revenge is a dish best served cold… with a kick of heat.

When the death of Fidel Castro was announced by his brother Raúl, much of Miami cheered. The hated dictator who broke up families, imprisoned his own citizens, and essentially placed the island nation of Cuba into a time capsule, is finally dead at the too-ripe age of 90.

This weekend, people took to the streets, and many restaurants celebrated by offering complimentary Cuba Libres to patrons.

Azucar, located in the heart of Little Havana, has long served frozen treats with a Cuban flair. Here, instead of finding French vanilla and bubblegum, you’ll savor flavors such as café con leche, plátano maduro, and Abuela María, the last named for owner Suzy Battle’s grandmother, who was born and raised in Cuba.

Battle says of the shop’s latest addition: “This ice cream is specifically for Fidel’s death. May he burn in Hell is the inspiration.”

Burn in Hell, Fidel! features the shop’s homemade chocolate ice cream, which is given a huge kick of cayenne. The heat, Battle says, “is for the Hell that Castro should be in now.” More