Well said, Mike Ditka. People have no right to disrespect our flag and country during a sporting event. If the players want a venue for a cause they could rent their own stadium, hire a band to play the anthem, and kneel all on their own dime.

TGP: Former NFL player and Bears coach Mike Ditka said during the Monday Night Football pregame show that he just doesn’t get all the social injustice the players are protesting, further arguing that everybody in America has an opportunity regardless of race or religion. 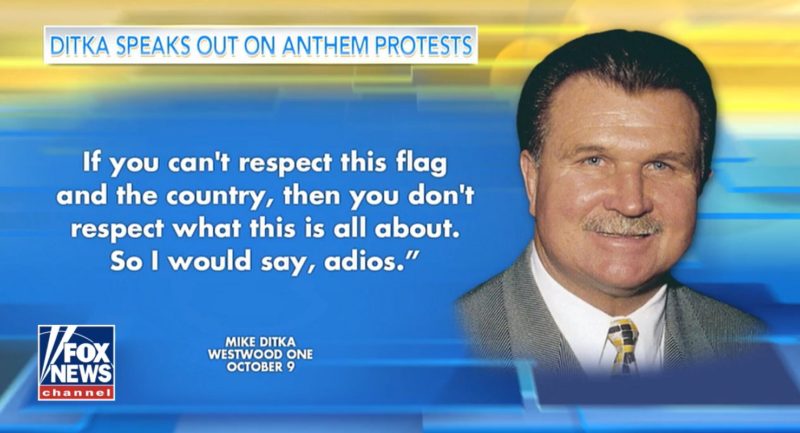 Fox News: “There has been no oppression in the last 100 years that I know of. Now maybe I’m not watching it as carefully as other people,” Ditka said.

“I don’t care who you are or how much money you make. If you don’t respect our country, then you shouldn’t be in this country playing football. Go to another country and play football. If you had to go to somewhere else and try to play this sport, you wouldn’t have a job,” he said.

“If you can’t respect the flag and this country, then you don’t respect what this is all about. So I would say: Adios.”

Mike Ditka: ‘If You Don’t Respect Our Country, Then You Shouldn’t Be in This Country Playing Football’ https://t.co/ykH7be8cAK pic.twitter.com/crRzLyZb5C

Ditka went on with Dallas’ 105.3 The Fan radio program this week.
He had this today about Kaepernick:

“I think it’s a problem when anybody who disrespects this country and the flag. If they don’t like the country, they don’t like our flag, get the Hell out! That’s what I think.”

Of course, the liberals came unhinged.

Mike Ditka spent a lot of his life around Black men.

He’s proof you can be around Black people & still not know much about Them.

Good news everyone: Mike Ditka says racism is over!

Mike Ditka?! Where do you live? Under a rock?

Mike Ditka Seriously if I was a Black NFL player, Id get everybody together & shut down that league. Hell,if I’d be hurtin my brain 4 Whitey

“Mike Ditka” is a fossil best left in the stone age he came from. If he can’t see oppression could it be he doesn’t know what it means?

Mike Ditka, what a dumbass