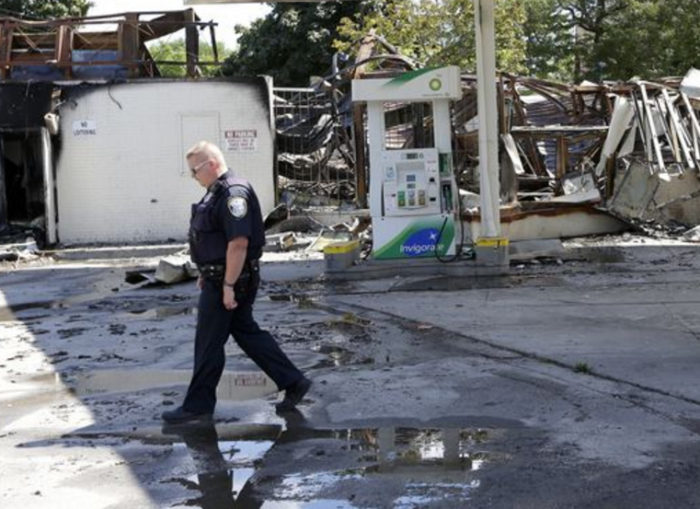 Will it will heat up again once the sun goes down?

The Milwaukee police officer who fatally shot an armed suspect Saturday is black, sources have told the Journal Sentinel.

City and police officials are expected to speak publicly this afternoon about the shooting and rioting that broke out in the surrounding Sherman Park neighborhood afterward.

Earlier Sunday, city and community leaders gathered to discuss the unrest and the underlying concerns of residents. And Gov. Scott Walker activated the Wisconsin National National Guard to assist the Milwaukee Police Department upon request.

Walker said he put the guard on alert after a request from Sheriff David A. Clarke Jr. and conferring with Mayor Tom Barrett and Major Gen. Donald Dunbar.

The development came as a sense of calm and order returned to the neighborhood Sunday morning after a night when businesses were torched, cars overturned and set ablaze, and gunfire erupted following the fatal police shooting.

A few hundred people gathered Sunday several blocks south of the shooting site, at the intersection of N. Sherman Blvd and W. Burleigh Ave., where a BP gas station was destroyed by fire. By mid-morning Sunday, the surrounding area was clogged with onlookers, in cars and on foot.

But people had begun amassing hours earlier to begin cleaning up trash.

At one point, volunteers crossed the police tape into the gas station, which was not being guarded by police and started picking up trash. Officers ushered them out and the cleanup continued near the station and in the surrounding blocks.

Mark Hale, 52, who works the third shift at the Hilton hotel downtown, said he was driving home and stopped by on his own to pick up trash.

“Instead of being part of the problem, I wanted to be part of the solution,” he said. “I figured if I started picking up trash, other people might do the same.”

Hale, who is black and his lived in the city his whole life, said he attributed the fires to businesses and squad cars to “a lot of idiots who don’t have jobs and don’t want to have jobs.” More

Apparently he didn’t see the pictures of all the dems not wearing masks as well
January 17th, 2021 The Real Side With Joe Messina
SHARE