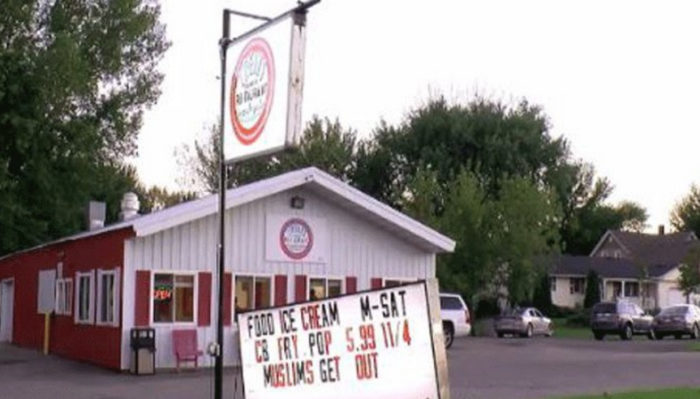 Liberals upset… That is just too bad too sad. This is the kind of backlash Muslims should expect to face, because they fail to root out the bad apples. Would a better sign be… All food contains pork. No exceptions?

The owner of Treats Family Restaurant in Lonsdale, Dan Ruedinger, told a local CBS News affiliate that business has been booming since he posted a sign outside that reads, “Muslims Get Out.”

Mr. Ruedinger said he had to call in three extra workers Monday to keep up with the demand.

“It’s time that people started standing up, not worrying about the PC crowd and do what is right,” Mr. Ruedinger told CBS. “And I feel what we’re doing is right. We are not targeting the Muslims in general, just the extremists. And that’s all I can say. It’s my right and I’m going to stand up, and I wish more people would do it.”

“Some Muslims are good people and want a better life. They need to step up, take control and hold the others accountable,” he told the Lonsdale News Review.

The restaurant has attracted some protesters who say the sign promotes hate in their community.

“I get it, it’s his right to say what he wants to say,” demonstrator Payten Estepp told CBS. “But that’s giving Lonsdale a bad rap to everyone that drives by on 19, which is a very busy road, so people are going to see that and they’re going to think Lonsdale as a whole, as a community, is as crass as that sign.”

Police were called to the restaurant Monday afternoon after a demonstrator started to pull the letters off the sign. Lonsdale Police Chief Jason Schmitz said the owner told her to stop and a small “altercation” occurred, the News Review reported. More