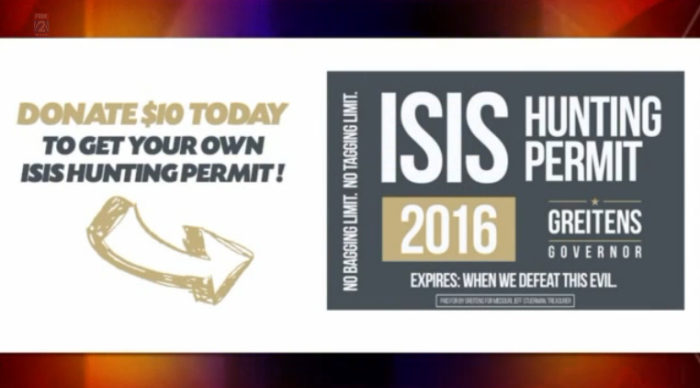 Nice! I want one too! Find them here.

TGP: Missouri Muslims are upset with the ISIS Hunting Permit 2016 stickers being handed out by GOP gubernatorial candidate Eric Greitens. CAIR officials complained the bumper stickers are “inappropriate” and may provoke attacks against Muslims.

Eric Greitens, one of the four Republicans running for Missouri Governor, has issued an ‘ISIS Hunting Permit’ as part of his campaign. Greitens’ campaign started selling bumper stickers with the words “ISIS HUNTING PERMIT 2016” on Tuesday. The sticker says it expires when “we defeat this evil.”

The mock hunting permits are being sold for a $10 donation. For $100, donors can get stickers signed by a former Navy SEAL who claims he killed Osama bin Laden.

“All of these people who are out there, they want to join our mission,” said Greitens. “They want to become part of the team- part of the campaign- and we thought this would be a fun way to let people know about my biography and that we all need to stand together against terrorism,” Greitens added.

While the stickers have no legal authority, one group finds them inappropriate.

The Executive Director for the Council on American Islamic Relations in Missouri, Faizan Syed, says the group stands against ISIS but he feels Greitens’ message may put Missouri Muslims in danger if it ends up in the wrong hands.

“The problem is with his target audience. Amongst them are radicals in this country who don’t know the difference between the two [Muslims and radical Islamists],” said Faizan Syed.

“Those are the people who we have to be worried about when they get a bumper sticker saying ‘here’s your permit to attack ISIS’. When they see a woman at Walmart with her children and they say, ‘this looks like ISIS, I’m going to attack ISIS,’ that is when the real trouble begins,” he said.

Greitens clarified his intentions behind the bumper stickers:

“The reason there’s this confusion is that unfortunately we have a commander-in-chief who is unwilling to say the words ‘radical Islamic terrorism’,” said Greitens.

“The people ISIS have hurt the most, who’ve been murdered the most, are the Muslim community.