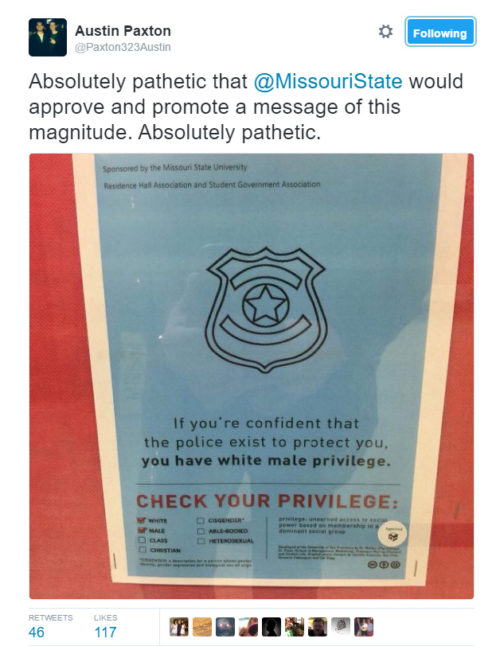 Is it any wonder that their enrolment is crashing? What parent would send their child to this cesspool of hate?

A poster campaign at Missouri State University sought to privilege-shame students for being straight, white, male, Christian or able-bodied (among other characteristics) and informed students that the police only exist to protect white men.

The posters were sponsored by the university’s student government and Residence Hall Association (RHA) and reportedly went up inside a dorm Saturday morning before being removed on Sunday night in the face of backlash from students on Twitter. The Daily Caller obtained pictures of six of the posters from an MSU student before they were taken down.

Each poster also included a definition of privilege in the lower right-hand corner: “unearned access to social power based on membership in a dominant social group.” More

If ur not a Christian u should be required to work on Xmas & Easter? These are national holidays #MyLiberalCampus pic.twitter.com/HLkVlWBg7T

Meanwhile, At The Anti-Trump Rally There Is Some Spectacular Parenting Happening