In no way a “valid representation of reality…”

Nothing in the world of the liberal is based on a valid representation of reality. Climate change was always about control. As the left lose their grip they will become more and more radical.

TGP: A new report which analyzed key global warming metrics such as Global Average Surface Temperature (GAST), the NOAA and HADLEY, confirms President Trump was correct in pulling out of the Paris Climate Agreement. 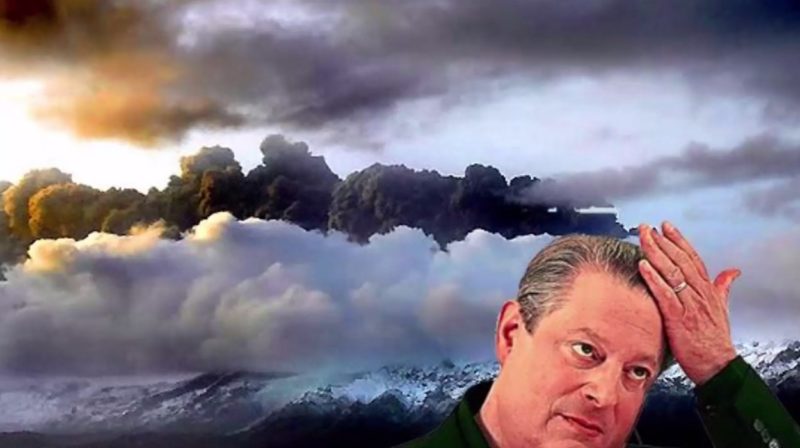 According to the report, which has been peer reviewed by administrators, scientists and researchers from the U.S. Environmental Protection Agency (EPA), The Massachusetts Institute of Technology (M.I.T.), and several of America’s leading universities, the data is completely bunk:

In this research report, the most important surface data adjustment issues are identified and past changes in the previously reported historical data are quantified. It was found that each new version of GAST has nearly always exhibited a steeper warming linear trend over its entire history. And, it was nearly always accomplished by systematically removing the previously existing cyclical temperature pattern. This was true for all three entities providing GAST data measurement, NOAA, NASA and Hadley CRU.

As a result, this research sought to validate the current estimates of GAST using the best available relevant data. This included the best documented and understood data sets from the U.S. and elsewhere as well as global data from satellites that provide far more extensive global coverage and are not contaminated by bad siting and urbanization impacts. Satellite data integrity also benefits from having cross checks with Balloon data.

The conclusive findings of this research are that the three GAST data sets are not a valid representation of reality. In fact, the magnitude of their historical data adjustments, that removed their cyclical temperature patterns, are totally inconsistent with published and credible U.S. and other temperature data. Thus, it is impossible to conclude from the three published GAST data sets that recent years have been the warmest ever –despite current claims of record setting warming.

Finally, since GAST data set validity is a necessary condition for EPA’s GHG/CO2 Endangerment Finding, it too is invalidated by these research findings. (Full Abstract Report)

Fulfilling a key campaign promise, President Trump shocked the world by pulling out of the Paris agreement. Axios’ Johnathan Swan was the first to report the President would pull out of the agreement.

On May 31st, Axios reported:

The other outliers: The only other two countries that aren’t supporting the deal are Nicaragua and Syria.

How it happened: A letter from 22 Republican Senators (including Mitch McConnell) that called for a clean exit had reinforced Trump’s instincts to withdraw, and the president had been telling confidants over the past week that he was going to pull out.

It’s no surprise that members of the liberal establishment shifted into meltdown mode following the decision, with Hollywood director Michael Moore and former President Obama being the most vocal.

As per The Hill:

“This admitted predator has now expanded his predatory acts to the entire planet,” Moore tweeted.

“USA to Earth: F— YOU,” the filmmaker added in other tweets. “America First! Earth Last! My name is Michael Moore. I am an American. And I live in a Rogue State.”

Obama’s statement was as follows:

A year and a half ago, the world came together in Paris around the first-ever global agreement to set the world on a low-carbon course and protect the world we leave to our children.

It was steady, principled American leadership on the world stage that made that achievement possible.  It was bold American ambition that encouraged dozens of other nations to set their sights higher as well. And what made that leadership and ambition possible was America’s private innovation and public investment in growing industries like wind and solar – industries that created some of the fastest new streams of good-paying jobs in recent years, and contributed to the longest streak of job creation in our history.

Simply put, the private sector already chose a low-carbon future.  And for the nations that committed themselves to that future, the Paris Agreement opened the floodgates for businesses, scientists, and engineers to unleash high-tech, low-carbon investment and innovation on an unprecedented scale.

The nations that remain in the Paris Agreement will be the nations that reap the benefits in jobs and industries created.  I believe the United States of America should be at the front of the pack.  But even in the absence of American leadership; even as this Administration joins a small handful of nations that reject the future; I’m confident that our states, cities, and businesses will step up and do even more to lead the way, and help protect for future generations the one planet we’ve got.

But of course, like all Champagne Socialists, their credo is “do as I say, not as I do,” with Obama jacking up his carbon footprint when abroad. Who could forget Obama’s massive convoy during a recent speaking gig in Milan?

Former President Barack Obama traveled to Italy this week to make a speech on climate change at the “Seed & Chips: The Global Food Innovation Summit” in the city of Milan.

It seems like Obama has taken a page out of Leonardo DiCaprio’s book of “do as I say, not as I do” and took a private jet to Milan. Not only that, he had a 14 car convoy to get into the city, which also included protection from above with a helicopter.

It doesn’t end there. According to The Daily Mail, 300 police officers were used to protect the former president.

The fleet of 14 included multiple SUVs, police cars, and sedans — not to mention a few motorcycles.

Here’s another look at the convoy:

While in Milan, Obama also met with former Italian Prime Minister Matteo Renzi, who was a close partner during their respective times in office.

Previously Deported Nigerian Man Ripped Off U.S. For $12 Million, Along With Illegally Voting