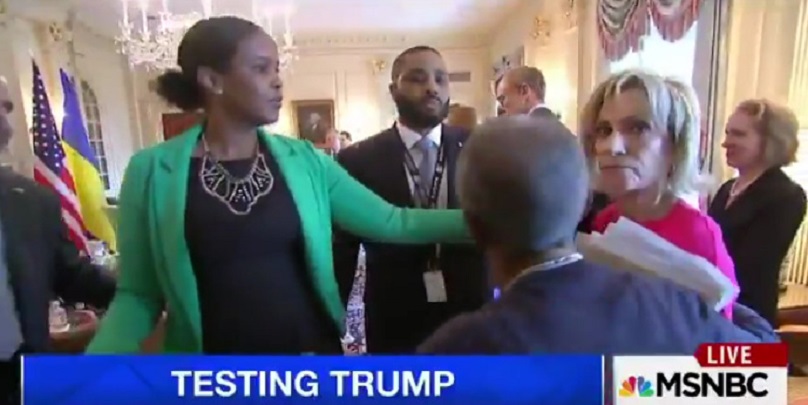 Poor Andrea, reduced to yelling and disrupting meetings and conversations like a toddler. But she has her marching orders to keep fakes news in the headlines as long as possible. She should be banned from further participation until she can act figure out how to like a professional.

WATCH: @mitchellreports escorted from room as she tries to question Sec. Tillerson, Ukraine FM on China and Russia. https://t.co/eF3Bawj17n

Andrea Mitchell makes an ass of herself in a press gaggle with Rex Tillerson and the leader of Ukraine…She yells questions over and over when told the photo op is over. She’s downright obnoxious and it even looks staged on her part. She looks pleased as a peacock when she’s escorted out…Hillary would be so pleased…

Cameras captured the moment that MSNBC journalist Andrea Mitchell was escorted out of a meeting between U.S. State Secretary Rex Tillerson and the Foreign Minister for Ukraine. Mitchell was yelling questions about Russia and Vladimir Putin Tuesday when she was hurried out.

As the two shook hands and cameras whirred away, Mitchell can be heard in a loud voice, asking, “Mr. Secretary, China has said there will be consequences for the deployment now of anti-missile defenses in South Korea, can you respond?” More