This is all about the ESTABLISHMENT versus the American people. Our government is corrupt on both sides of the aisle.

Three people telling the millions of Trump voters how it’s going to be is NOT acceptable. They shouldn’t bother running for re-election because they’re out! It’s time to vote out and get rid of all these career scumbags.

TGP: Following Senator John McCain’s vote that killed all prospects of repealing Obamacare, calls have begun for Senate Majority Leader Mitch McConnell to step down from his leadership post. In particular, Rep. Mo Brooks, running for Attorney General Jeff Sessions’ Senate seat in Alabama, is calling on McConnell to leave his post, branding the Kentucky Senator “Head of the Swamp.” 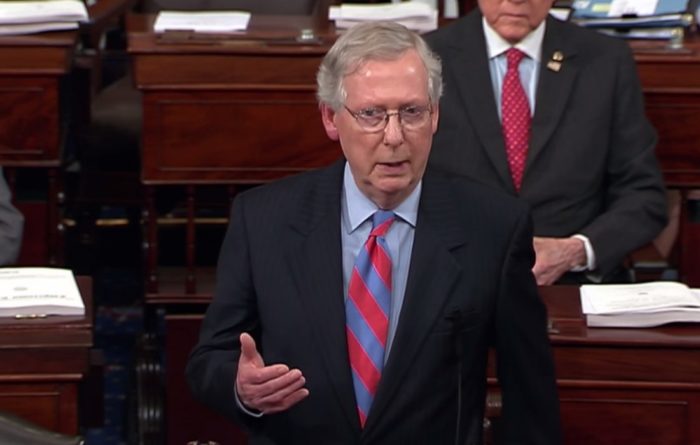 Rep. Brooks joined CNN’s Chris Cuomo to blast McConnell, calling on him to step down after failing to repeal Obamacare.

The Hill reports: Rep. Mo Brooks (R-Ala.) is renewing his call for Senate Majority Leader Mitch McConnell (R-Kent.) to step down from his leadership role after the chamber rejected a scaled-back version of a GOP bill to repeal parts of ObamaCare.

“Unquestionably the leadership at the top is responsible. The buck stops there, that’s why you take on that kind of responsibility,” Brooks said. “And if Mitch McConnell cannot get the job done on this, how is he going to get the job done on the rest of President Trump’s agenda over the next three-and-a-half years? This is a killer.”

“It’s not necessarily anything bad about Mitch McConnell himself personally. But he’s got a job to do, and if he can’t do it then, as ‘The Apprentice’ would say, ‘you’re fired,’ get somebody who can.”

To be sure, it’s not the first time Brooks, who’s running for the Senate seat previously held by Attorney General Jeff Sessions and currently occupied by Sen. Luther Strange (R-Ala.), has called for McConnell to step down from his leadership role.

He also raised the idea on Wednesday during a policy breakfast at the conservative Heritage Foundation, where he called McConnell the “head of the swamp.” The majority leader is supporting Strange’s Senate bid.

As The Gateway Pundit reported, the Senate blocked the latest attempt by the GOP to repeal Obamacare in a midnight vote, stalling one of President Trump’s main campaign promises.

Who were the three GOP lawmakers who blocked the bill? Never Trumper Susan Collins of Maine, Lisa Murkowski of Alaska and John McCain of Arizona in a 49-51 vote. After McCain gave his thumbs down and said ‘no’, gasps could be heard from the Democrat side of the aisle (McCain’s friends).

CNBC reports: The Senate blocked the latest Republican attempt to repeal Obamacare in a dramatic floor vote early Friday morning, yet again stalling — for now — the key campaign goal that eludes the GOP six months into the Trump administration.

Three GOP votes — Sens. Susan Collins of Maine, Lisa Murkowski of Alaska and John McCain of Arizona — sank the measure in a 49-51 vote. McCain, who recently returned to the Senate after getting diagnosed with brain cancer, cast his “no” vote to audible gasps on the chamber’s floor, according to reporters there.

Senate Republicans released the plan late Thursday just hours before voting on an amendment to take up the bill.

Here are the provisions in the so-called skinny repeal bill, which the GOP titled the Health Care Freedom Act:

President Trump has repeatedly urged lawmakers to come together to get a functioning healthcare system in place since Obamacare is failing.