For this alone, Robert Mueller should resign! He should have never accepted the job of special counsel in the first place due to his numerous conflicts of interest.

When he and James Comey met secretly he should have resigned. Now he should be prosecuted for trying to overthrow duly elected President Trump and therefore the US government.

There are many reasons why the entire Trump – Russia investigation is a farce.  One major reason is the fact that Special Counsel Robert Mueller and Former FBI Director James Comey have a relationship that taints the investigation. 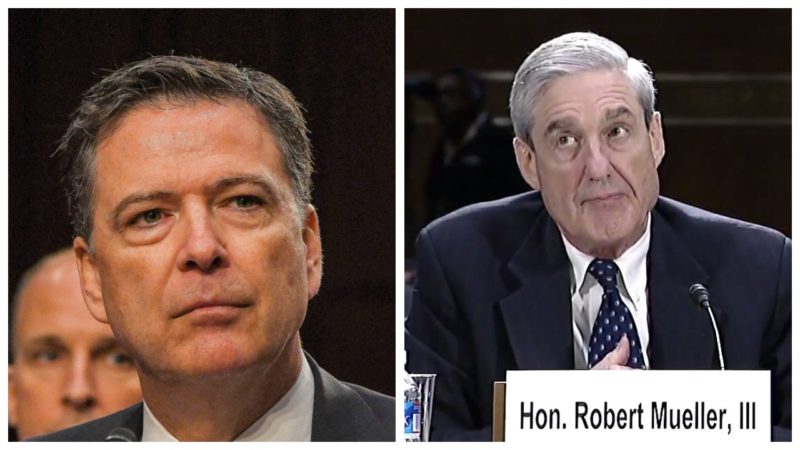 The fact that they met secretly before Comey’s testimony to Congress in June is enough evidence to contaminate the entire investigation. At the very least Mueller should have recused himself months ago.

Back in May after crooked Comey was fired by President Trump, Comey was asked to appear in front of Congress.  Comey however, postponed his meeting with Congress because he wanted to meet with Special Counsel and best friend Robert Mueller before appearing in front of the Senate.

CNN reported in May that:

“Mr. Comey did not want to come testify publicly because of the presence of a special counsel,” Chaffetz, a Utah Republican, told Wolf Blitzer on “The Situation Room.”
The interview comes two days after Chaffetz announced he postponed his panel’s hearing related to the FBI’s independence scheduled for Wednesday.

Chaffetz tweeted about the delay:

Spoke with Comey. He wants to speak with Special Counsel prior to public testimony. Hearing Wed postponed. @GOPoversight

Comey met with best friend and dirty cop Mueller and then appeared before Congress.  Comey’s testimony was the pinnacle moment where the deep state showed that they were out to remove President Trump from office.  However, Comey’s testimony imploded as Judicial Watch reported:

On June 8, 2017, Comey gave testimony before the Senate Select Committee on Intelligence, in which he admitted: “I asked a friend of mine to share the content of the memo with a reporter [for The New York Times]. I didn’t do it myself for a variety of reasons, but I asked him to because I thought that might prompt the appointment of a special counsel.”

“Mr. Comey may have violated the law in leaking these memos to the media,” said Judicial Watch President Tom Fitton. “It would be a scandal if Comey coordinated his Senate testimony with Mr. Mueller’s special counsel office. That we have had to sue in federal court speaks volumes.” Read more at TGP.

Cockroaches gathering just under the edge of the kitchen cabinets, in anticipation of the light coming on, and the can of Raid being aimed in their direction. Time to spray ’em!