Why isn’t the civilized world fighting harder against this evil? This is absolutely sick. They both should be deported. Unacceptable behavior and should be harshly punished.

I don’t understand why these people come to this America to escape the horrors of a Muslim country and bring along this sort of horrible thing with them. This procedure is sexual assault and these little girls have been damaged for life. No sharia law in America!

100%FedUp: The evil in this is so beyond belief. The Michigan case of a doctor who practiced the ritual of female genital mutilation on Muslim girls has ended with the release and house arrest of the offenders who still claim their innocence. They claim they only “scraped” the genitals of at least 100 young girls who came from as far away as Minnesota for this horrific procedure. In actuality, the girls were cut on their genitals and testified to the severe pain they felt:

Court documents said the Minnesota girls were told they were going to Michigan for a “special girls’ trip,” and their parents instructed them not to speak about the procedure. One of the girls told investigators that they were taken to the doctor’s office because their “tummies hurt” and the doctor was going to “get the germs out,” while the other told authorities following the procedure she could “barely walk, and that she felt pain all the way down to her ankles.” 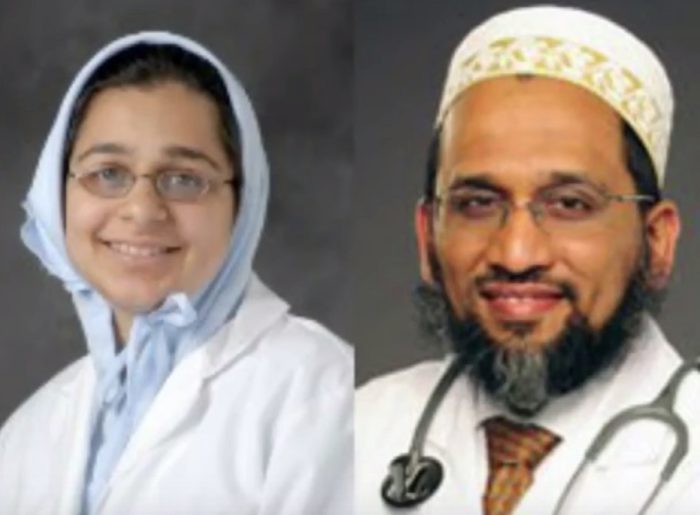 The doctor also tried to cover it up This woman deserves to be in jail and NOT just get a slap on the wrist. Does anyone out there think she’ll quit doing this? We doubt it! The lack of severe punishment will only encourage the practice here in the U.S. Where are all the feminists?

FRIENDS AND FAMILY IN HIGH PLACES

Dr. Jumana Nagarwala, the lead defendant in a historic genital mutilation case who has been locked up for five months, is about to taste freedom again thanks to generous friends: They offered more than $4.5 million in property to secure her bond.

That, along with other factors, convinced U.S. District Judge Bernard Friedman today to grant bond to Nagarwala, whom the government believes subjected as many as 100 minor girls to genital cutting procedures. Friedman concluded that Nagarwala isn’t a flight risk given all that her friends and family have to lose should she flee.

“I spent a lot of time reviewing this,” said Friedman, noting “the people who have come forward” to help Nagarwala and the money they are putting up are “very substantial.”

Defense attorney Shannon Smith, who is representing Nagarwala, said she and her client were relieved by the decision.

“After five months of her being locked up, it’s nice to see that she’ll be able to be out on bond,” Smith said. “She is very happy.”

According to Smith, the individuals who offered property to secure Nagarwala’s bond all live out of state. The property, she said, is all paid off.

Nagarwala also has been ordered to wear a tether and will temporarily live in a hotel. Her two minor children currently live in their home with their father. Nagarwala is allowed only supervised visits with the children and could lose her parental rights, though Smith is continuing to fight that possibility and argues Nagarwala’s children are thriving academically and personally and should be with both their parents.

The prosecution argued against granting bond to Nagarwala, saying she has the resources and motive to flee: she lost her job, could lose her parental rights and faces up to life in prison. Releasing her on bond could also give her more time to silence witnesses in the case, prosecutors have argued, claiming Nagarwala has already told members of her religious community to “deny everything” if investigators ask about genital cutting procedures.

A VIRGINIA IMAM WAS IN HOT WATER A FEW MONTHS AGO FOR RECOMMENDING FGM TO PREVENT “HYPERSEXUALITY”:

A COVER UP AND GENITAL MUTILATION RECEIVES LITTLE PUNISHMENT

In lobbying against bond, Assistant U.S. Attorney Sara Woodward argued today that Nagarwala “is the one who directed” a 12-year conspiracy that involved bringing young girls to a Livonia clinic for genital cutting procedures. Moreover, she stressed, Nagarwala was the one who “wielded the instrument to cut several young girls” and then tried to cover it up.

The defense has claimed that the government is overstating its case and that Nagarwala and her co-defendants were engaging in a religious procedure that involved no harm. The case involves eight defendants — including two doctors, a physician’s wife and four mothers — who are accused of participating in various degrees of subjecting young girls to genital cutting as part of a religious practice within their Indian Muslim sect.

All defendants are members of the Dawoodi Bohra — a small Indian Muslim sect with a mosque in Farmington Hills that practices female circumcision and believes it is a religious rite of passage that involves only a minor ‘nick.’

The lead defendant is Nagarwala, a now-fired emergency room physician at Henry Ford, who is charged with performing the procedure on six girls at a Livonia clinic. Two of the girls are from Minnesota; four from Michigan. The clinic owner and his wife have also been charged.

Dr. Fakhruddin Attar, 53, of Farmington Hills, is accused of letting Nagarwala use his clinic to perform genital cutting procedures on minor girls; and his wife, Farida Attar, 50, is accused of holding the girls’ hands during the procedure to keep them from squirming and to calm them.

Four mothers also have been charged in the case, accused of putting their daughters in harms way by letting Nagarwala cut their genitals as part of a religious procedure.

Prosecutors have argued that the federal genital mutilation law is clear: It prohibits “knowingly circumcis(ing), excis(ing) or infibulat(ing) the whole or any part of the labia majora or labia minora or clitoris of any other person who has not attained the age of 18 years.”

PAINFUL! – WHAT HAPPENED TO “DO NO HARM”?

According to court documents, in interviews with authorities, the two Minnesota victims described the genital cutting procedures as painful.

One girl said that she got a shot, screamed, and “could barely walk after the procedure, and that she felt pain all the way down to her ankle.” The other said she was “laid on an examining table with her knees near her chest and legs spread apart,” that she was “pinched” in the genital area, that it “hurted a lot” and that there was “pain and burning.”

Both girls were told to keep the procedures a secret, court records show. One said “the doctor made her (friend) cry.”

Especially egregious, authorities have argued, is that this procedure was carried out by a doctor who took an oath to do no harm.

“She knew that this was illegal but did it anyway,” Woodward has said of Nagarwala, stressing: “As a medical doctor, she is aware that female genital mutilation has no medical purpose.”