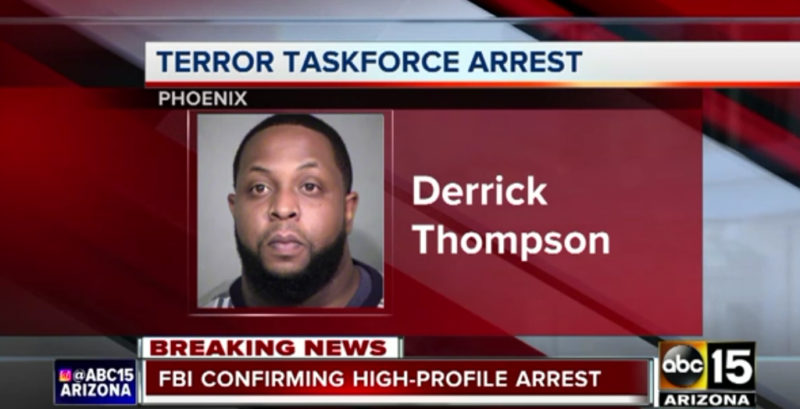 Investigators say a Phoenix man was plotting a ‘lone wolf’ attack in support of ISIS.

Derrick Thompson, who also goes by the name Abu Talib Al-Amriki, was arrested by the Arizona Joint Terrorism Taskforce earlier this week.

In October, investigators say Thompson made several Google searches including: midnight mass, martyrdom vs suicide and which type of gun is the most powerful. He also reportedly posted on his Google Plus account in October, “We need to get down with this ISIS S***.”

According to court paperwork, it was January 2015 when Thompson tried to buy gun from backpage.com with the intent to carry out an attack for ISIL. However, Thompson is a convicted felon – which prohibits him from buying a firearm.

Investigators say since 2014, Thompson has been an “avowed jihadist,” and has conducted 100’s of Google searches for handguns, rifles, scopes and crossbows.

Thompson, who was raised in Arizona, was involved in two armed robberies in 2005 along with two other men. They robbed two men in two days, armed with a handgun and an SKS rifle with a bayonet. Thompson was sentenced to seven and half years in prison for his involvement in these crimes. Thompson was released on January 1, 2013.

Thompson’s arrest comes a month after an 18-year-old Arizona man was sentenced to eight years in prison for terrorism convictions stemming from a plot to attack a motor vehicle office in metro Phoenix.

The fact that Derrick Johnson has given himself an Arabic name and was preparing to be a martyr tells us that he takes his commitment to Islam very seriously. He most likely converted to Islam in prison. Muslim gangs are taking over our prisons and converting inmates at an alarming rate. What is even more egregious is that he was only recently arrested despite his overall abysmal history of crimes and repeated attempts to carry out terrorist attacks after his release from prison in 2013.

We need to have a zero tolerance policy for people who attempt to carry out terrorist attacks. If we don’t take this fight seriously, we will end up like Christians and Jews in the Middle East who are constantly attacked in their places of worship.

A Picture Worth A Thousand Words...