Muslim Preacher Charged After Cursing At Woman, Spitting In An Officer’s Face 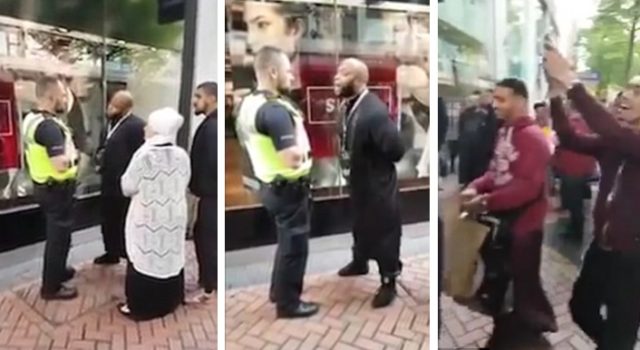 This Muslim preacher is using his freedom of speech to make himself look ridiculous. Shouting in people’s faces and cursing at them does not get your point across in a good way.

The best part of the whole video is when this pompous Muslim street preacher tells the police officer that the woman in the “tight jeans” confronted him. He goes on to say, if the cop doesn’t believe him, to ask any of the Muslims who are surrounding and encouraging him to berate the police officer. Things are about to get very ugly in these areas around London where Muslims have formed very strong enclaves of citizens and refugees who have no intention of assimilating with British citizens…

An Islamic street preacher has been arrested and charged after allegedly screaming abuse at a woman for wearing ‘tight jeans’ and shouting ‘Allah Akbar’ in a police officer’s face.

Krissoni Henderson appeared to be caught on camera angrily confronting the officer – who was investigating a complaint made against the 31-year-old.

The unnamed policeman was called to New Street in Birmingham city centre at around 5.30pm on July 4 following a 999 call from a 38-year-old woman who said she feared for her safety after a verbal confrontation. She alleged she had been shouted and sworn at.

In the footage below, a man alleged to be Henderson is wearing traditional Islamic dress and standing with another man and a woman.

‘Here is my witness,’ he appears to yell, gesturing to the woman, ‘if you want to arrest me arrest me.’

He vehemently explains that the woman who complained had walked up to him rather than the other way round, making him the innocent party.

‘Do you think I’m scared?’ he says skeptically to the officer who is trying to reason with them.

He then begins to shout with increasing force over the policeman: ‘Freedom of speech, we are not going to take your racism anymore. We’re not terrorists and we are not suicide bombers, throw your television in the dustbin. This is a free country and we can speak freely in public!’

He goes on to claim that the woman who complained had threatened him when she approached him.
But when the officer asks if he can give him the ‘common decency’ of not shouting over him the preacher continues to bellow his reasoning.

And as the policeman walks away slightly to attempt to defuse the situation he yells after him, ‘Go, go find some rapists!’ More

Muslim Preacher Charged After Cursing At Woman, Spitting In An Officer’s Face