Muslims just ambushed Trump Tower In NYC. Why isn’t the NYPD doing anything? What about the traffic (car and foot)? Don’t Americans count anymore at all? They broke the law. Arrest them. Period!

This is why they need to stay in their country. They are not and refuse to become Americans. They can have their religion but keep it where it belongs and that’s not in the street. 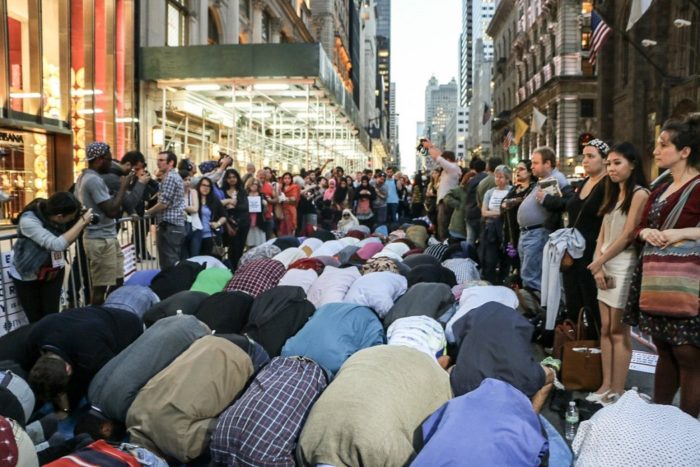 TGP: New York – Muslims continued on with their civilization Jihad as they took over the street in front of Trump Tower during ‘Iftar’ or ‘breaking their Ramadan fast’.

There is no reason for this other than Muslims letting the infidels know that they here and working on their Islamic takeover.

Of course Hamas-linked, Linda Sarsour was also there spewing more lies about her intentions as a Muslim activist. She claims Trump is full of hatred and divisiveness which of course is untrue. The real hate and divisiveness comes from Islam and Sarsour knows it.

Muslim countries are the most bigoted places on earth. Several Muslim countries don’t even allow Israeli Jews to enter, yet Sarsour acts like a victim. Saudi Arabia prohibits Christian churches and Jewish Synagogues from being built, so save us the crocodile tears, Sarsour.

“We’re showing this is what NYC looks like.”@womensmarch organizer Linda Sarsour stands with Muslims in front of Trump Tower during Iftar: pic.twitter.com/SHeJ5KSwrA

Below is video of the Muslims ‘praying’ as they take over the street in front of Trump Tower:

Hundreds came together to support #IftarInTheStreets in #NYC this evening in front of Trump Tower. #Ramadan2017 pic.twitter.com/Mw2LuixhIn

Sewer Worker Dies After Muslim Doctors Refuse To Treat Him... Because He Was "Unclean"

COMEDY GOLD! The Left Goes Insane "We Are All Going To Die" (Video)