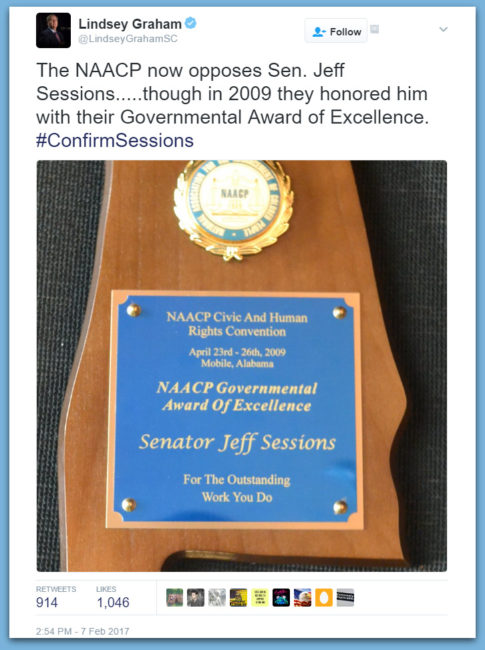 “Apparently NAACP President Cornell Brooks doesn’t stay in contact with the NAACP chapter in Alabama,” Sen. Lindsey Graham said while sharing news of the award on the Senate floor.

But now they are calling him a racist?

The NAACP now opposes Sen. Jeff Sessions…..though in 2009 they honored him with their Governmental Award of Excellence. #ConfirmSessions pic.twitter.com/N161sC5AnE

The NAACP has been highly critical of President Trump’s nomination of Sen. Jeff Sessions to be U.S. attorney general, but it seems the group is unaware that its Alabama chapter doesn’t seem to agree—or least it didn’t back in 2009 when it awarded him their “Governmental Award of Excellence.”

The award was recently located while Sessions’ aide was helping him clean out his office to prepare for his move to the DOJ, Politico reported. The Alabama senator even had to send in a supplemental response to the Senate Committee on the Judiciary’s questionnaire regarding honors and awards he’s received. More

Megyn Kelly: Biden’s Call for Unity Is ‘Nonsense’; the Left Has ‘Awakened a Sleeping Giant’
January 23rd, 2021 The Mental Recession

Will Janet Woodcock, MD Be Dangerous To America If She Is Appointed FDA Commissioner?
January 23rd, 2021 Sons of Liberty Media

Biden press sec after he is caught violating his own mask order: He has ‘bigger issues’
January 23rd, 2021 Liberty Unyielding
SHARE