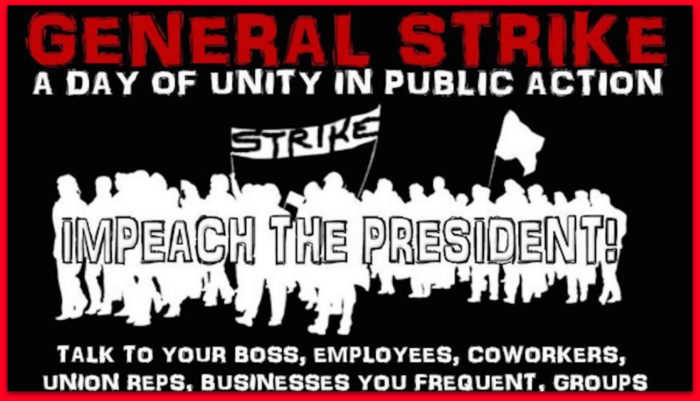 If we didn’t impeach Obama for his total lawlessness, then why would we impeach Trump for protecting our country? You are a bunch of intolerant snowflake cry babies. Time to grow up.

In a piece she wrote for The Guardian last month, novelist Francine Prose posited that President Donald Trump’s executive order barring immigrants from seven majority-Muslim countries from traveling to the U.S. for 90 days called for more than simple protests: “Trump’s actions warrant a general national strike,” the headline read. Now that idea is gaining support online.

While the travel ban hangs in limbo, Prose laments what some have termed “slacktivism”: or the general “feel-good” result of lodging a complaint by attending a protest, but achieving little more than a pat on the back from other activists:

Since Trump’s election, we’ve seen dozens of demonstrations – most notably, the Women’s March on Washington – that have reinforced our sense of solidarity and provided encouraging evidence of how many Americans oppose our government’s fundamentally anti-American agenda.

But the trouble is that these protests are too easily ignored and forgotten by those who wish to ignore and forget them. The barriers go up, the march takes place, the barriers come down. Everyone goes home happier.

So, presumably in order to really achieve something, Prose says she believes that America should engage in “a nonviolent national general strike” of the kind more common in Europe than stateside. “Let’s designate a day on which no one (that is, anyone who can do so without being fired) goes to work, a day when no one shops or spends money, a day on which we truly make our economic and political power felt, a day when we make it clear: how many of us there are, how strong and committed we are, how much we can accomplish,” she writes.

An official site for the event calling for a “24-hour occupation of public space in protest of the Trump administration’s refusal to Honor the Constitution of the United States of America,” was created. The strike also has a social media presence with a Facebook event that has 23,000 interested and 14,000 committed to attending. More