They say they like to keep sports politics free, but these are the very same idiots who were praising Colin Kaepernick and calling him a Civil Rights leader when he was promoting the killing of cops.

TGP: Lead baseball writer for NBC Sports, Craig Calcaterra, tweeted out this attack on the US flag on Easter morning.

“Will you keep politics out of sports, please. We like sports to be politics-free”

Democrats are so full of hate today that the American flag and military men and women in uniform are too “political” for them. 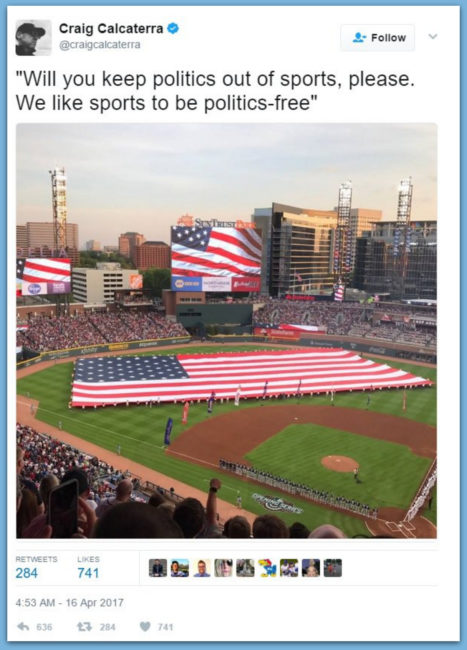 Calcaterra followed up the tweet with this jewel:
“Maybe a flag, in and of itself isn’t always political. A two-acre flag with a military flyover is saying something very specific, however.”

@DiamondStarsGM Maybe a flag, in and of itself isn’t always political. A two-acre flag with a military flyover is saying something very specific, however.

Calcaterra went on – calling the US flag “just a piece of fabric.”

It is truly amazing how love for one’s country can set off these liberal hacks! Unreal.