NBC is trying to stir up more media attention by tweeting that they won’t retweet President Trump’s tweets about the London attacks yesterday.

Newsbusters: Late Saturday night, London, England fell victim to yet another terrorist attack using a motor vehicle to mow down pedestrians. As details were first coming out, Drudge Report put out a tweet which read: “Fear of new terror attack after van ‘mows down 20 people’ on London Bride…” Soon after, President Trump retweeted the message. The retweeting didn’t sit well with NBC Nightly News, who noted on their own account that “Pres. Trump has used Twitter to share news report on London incident. We aren’t relaying [sic]president’s retweet, as the info in unconfirmed.” 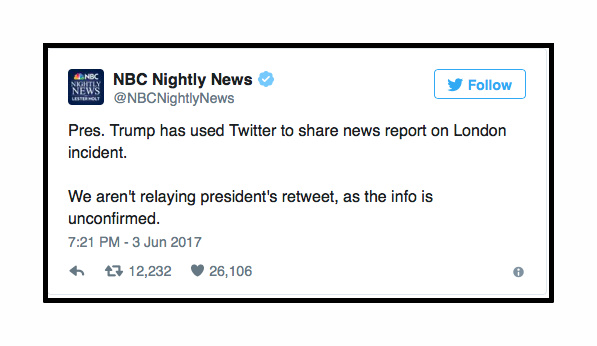 A short time after four o’clock, the President shared his thoughts for the first time. “We need to be smart, vigilant and tough. We need the courts to give us back our rights,” Trump wrote. “We need the Travel Ban as an extra level of safety!” A few minutes after that, Trump added his condolences to America’s best ally. “Whatever the United States can do to help out in London and the U. K., we will be there – WE ARE WITH YOU. GOD BLESS,” he exclaimed.

“As security incident continues to develop in London, Pres. Trump tweets, ‘We need the Travel Ban as an extra level of safety,’” NBC Nightly News’ Twitter account noted, seeming as though to knock the President’s timing. They did report on the President’s condolences to the people of London and the U.K. absent any snarky qualifier.

As security incident continues to develop in London, Pres. Trump tweets, “We need the Travel Ban as an extra level of safety!”

So apparently, NBC found it pertinent to rebuke and critique the President while they should’ve been focused on reporting a developing story. They won’t mention a tweet from the President because of “unconfirmed” details, but they can freely speculate about nearly everything when comes to him and that counts as “news.”