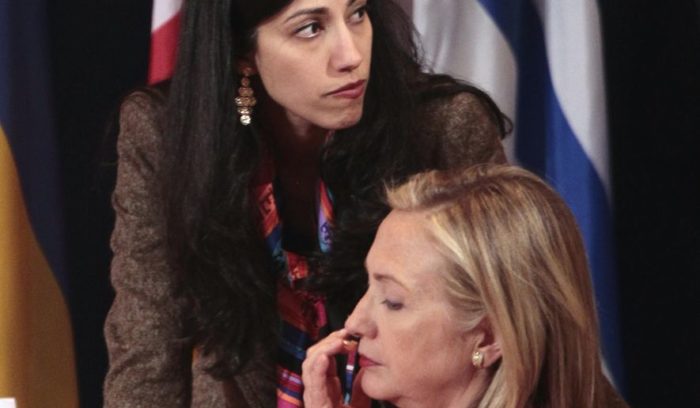 Is this not illegal? If the emails provide prove that Huma Abedin gave favors to the Clinton Foundation why are they not being charged?

In one exchange Doug Band, who headed the Clinton Global Initiative, asked Ms. Abedin to try to help with a visa for a soccer player from a British team, Wolverhampton FC. Ms. Abedin at first thought she might be able to speed up the interview, but then said she was worried about crossing lines.

“Makes me nervous to get involved but I’ll ask,” she told Mr. Band in one message obtained by Judicial Watch, a conservative group that’s pushed to get a look at the Clinton emails.

During the May 2009 exchange, Mr. Band also complained about the difficulty of connecting with Ms. Abedin through her confusing array of different email addresses.

In another exchange Mr. Band appeared to be trying to learn inside information about appointments, asking who was going to be appointed ambassador to France or Italy. Ms. Abedin demurred, saying she wasn’t sure. Days later, President Obama appointed a top Democratic donor to the post.

At one point the crown prince of Bahrain had requested a meeting with Mrs. Clinton through official channels, but she seemed reluctant to commit.

Mr. Band emailed Ms. Abedin letting her know the prince was a “good friend of ours.” Mrs. Clinton ended up scheduling the meeting and Ms. Abedin said Mr. Band could alert the prince to the meeting — though she also said they’d let him know from “normal channels” too.

The Clinton Foundation and its murky ties to foreign governments and major corporate donors has become a headache for Mrs. Clinton, Democrats’ presidential nominee. More

Judge Jeanine Asks What Have Democrats Done for Minorities?

*NEW* BREAKING: Rare And EXTREMELY Contagious Disease Just Hit America And Could Spread Like Wildfire- Here’s What It Is And Guess Where It’s Coming From!
America's Freedom Fighters