Thank God Judicial Watch is on the case because they are the only ones I trust to look into all things Clinton.

If she’s tried and convicted, showing proof beyond a reasonable doubt, the Democrats will dream up some frame job talking points to blame a “vast right wing conspiracy” while inciting their mindless zombie followers to riot because of this “injustice.”

Should Trump start listening to the “Lock Her UP!” contingent of the party? 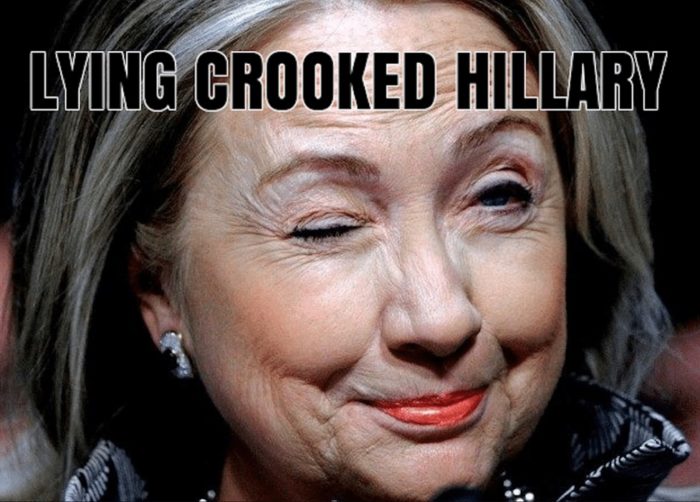 Judicial Watch: The records were obtained in response to a court order from a May 5, 2015, lawsuit filed against the State Department (Judicial Watch, Inc. v. U.S. Department of State (No. 1:15-cv-00684)) after it failed to respond to a March 18, 2015, Freedom of Information Act (FOIA) request seeking: “All emails of official State Department business received or sent by former Deputy Chief of Staff Huma Abedin from January 1, 2009 through February 1, 2013 using a non-‘state.gov’ email address.”

On December 6, 2010, Secretary Clinton shared classified information with non-U.S. government employees Justin Cooper, then-aide to President Clinton who helped manage Hillary Clinton’s unsecure email system, and Clinton Foundation director Doug Band (neither of whom held security clearances). The email instructs her aide Oscar Flores to “print for Bill” (presumably Bill Clinton). The email exchange, which involved allegations of the theft of foreign aid by Bangladeshi banker and major Clinton Foundation donor Muhammad Yunus, started with an email from an unidentified person to State Department official Melanne Verveer, who forwarded her exchange on to Hillary Clinton, who then sent it on to Flores, Cooper and Band.

For example, in a May 2010 email, Huma Abedin says she has “hooked up” people from the Russian American Foundation with “the right people” at the State Department:

Hi Rina – wanted to connect on meeting at state department. Eddie trump passed on your email. Will be in touch soon

Just wanted to follow up and express our gratitude. I was contacted today by Ms. Christina Miner who invited us to be part of the US-Russia Cultural Sub-Working Group meeting next week. Thank you very much for all your assistance – if there is any way we can be of assistance, please do not hesitate to contact me.

fyi – we hooked her up with the right people here

The Russia-American Foundation was staffed by Clinton political supporters and operatives, received over $260,000 in grants for “public diplomacy” from the Clinton State Department, and its leadership was supportive of Obama’s Russia policies.

President of Judicial Watch, Tom Fitton had this to say about the new revelation:

“These shocking new Clinton emails show why the Justice Department should reevaluate, reopen, or reinvigorate Clinton, Inc. investigations. The casual violation of laws concerning classified material and noxious influence peddling show the Clinton State Department was ‘corruption central’ in the Obama administration.  No wonder Clinton’s allies in the State and Justice Departments had been slow-walking and hiding these emails.”

This must be the ‘nothing burger’ Hillary Clinton was talking about yesterday in her deranged tirade at the Recode convention. According to Hillary Clinton, sharing classified information to people who do not have the proper clearances is no big deal….and she wonders why she lost the election in an electoral landslide.