Ridiculous! Historical revisionism has gone mad. Brought to you be the greatest historical re-writers in history. Let’s just tear down everything and deny history. All of D.C. too. Will that make all these idiots happy? I seriously doubt it. New Orleans was already a pit, now it’s a PC pit.

Isn’t this what ISIS has done everywhere they are? Destroy history because it doesn’t suit them… 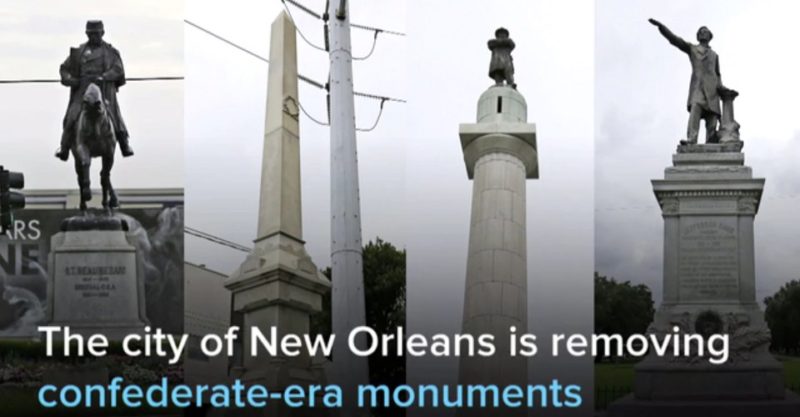 NYT: New Orleans on Monday began removing four monuments dedicated to the era of the Confederacy and its aftermath, capping a prolonged battle about the future of the memorials, which critics deemed symbols of racism and intolerance and which supporters viewed as historically important.

Workers dismantled an obelisk, which was erected in 1891 to honor members of the Crescent City White League who in 1874 fought in the Reconstruction-era Battle of Liberty Place against the racially integrated New Orleans police and state militia, Mayor Mitch Landrieu said in a statement.

The monument, which was sometimes used as a rallying point by David Duke and the Ku Klux Klan, has stirred debate for decades. Local leaders unsuccessfully tried to remove it in 1981 and 1993.

The workers were dressed in flak jackets, helmets and scarves to conceal their identities because of concerns about their safety. Police officers watched from a nearby hotel. More