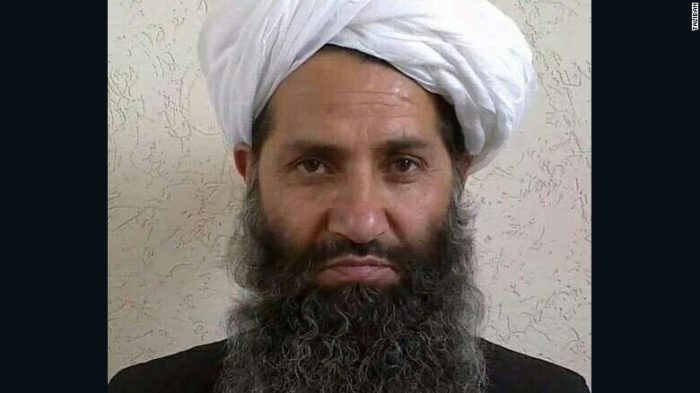 Of course he will continue the terror on their enemies.. Should we expect anything less from these barbaric, hateful people?

The new Afghan Taliban leader has told commanders and the group’s supreme leadership council that there will be no peace talks with the Afghan government, a source in the group reached through an intermediary said Wednesday.

The source said that Mawlawi Haibatullah Akhundzada, newly appointed to lead the terror group after a U.S. drone strike killed Mullah Akhtar Mohammed Mansour, will follow the militant policies espoused by founder Mullah Omar, who was killed in Pakistan in 2013.
The source said that the appointment of Akhundzada “will bring back the era of Mullah Mohammad Omar,” referring to the one-eyed mujahedeen commander who led the group from its inception in 1994, with “a simple life, loyalty, and terror on enemies.”
The Taliban has made strong battlefield gains against government forces in recent months, driving back Afghan troops from key positions and launching a string of bombings in Kabul.
On Wednesday, as the new leader was announced, the group claimed responsibility for a suicide bombing in the capital that killed 10 people and injured four others, including two children.

However, Sayed Mohammad Akbar Agha, a founding member of the Taliban who lives in Kabul and says he knows the new leader, told CNN that Akhundzada is an educated and well-respected man, with more clerical and judicial experience than military, and brokering a peace with him could be easier than with Mansour.

The new Taliban leader belongs to the Noorzai tribe and is in his late 50s — although the Taliban claim he is 47 years old — and hails from the Taliban heartland in the Panjwai district of southern Kandahar province, according to Agha.
He became Mullah Mansour’s deputy when Mansour succeeded Mullah Omar, and subsequently took an active part in the day-to-day running of the movement, playing a key role in negotiating a ceasefire with a dissident Taliban faction earlier this year. More