Triggered and heading for their safe places! Suck it up snowflakes. Absolutely guaranteed those that walked out will all be unable to find or keep a job in the real world.

Dear Grads, Wake the heck up! This is not the way the real world works… Just wait until you find out there are no safe places at work. If you think you can pull that crap at work, good luck with that one!

Just wait until you find out there are no safe places at work. If you think you can pull that crap at work, good luck with that! 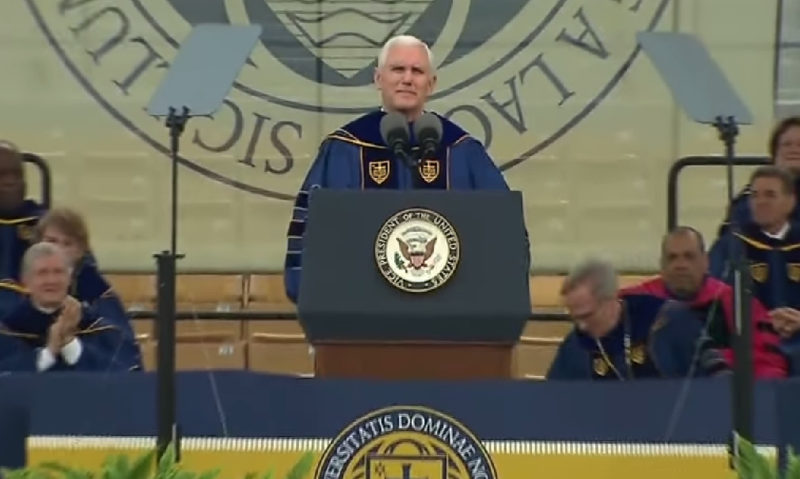 As Vice President Mike Pence began his remarks at Notre Dame’s commencement ceremony Sunday, dozens of graduates walked out in protest of the Trump administration’s policies.

More than 100 students participated in the planned protest, which was aimed at showing the student’s discontent with the Trump administration’s policies on LGBT rights and people of color, the student group We StaND wrote in a statement ahead of the ceremony.

Notre Dame, a predominately Catholic university, is located in South Bend, Ind. — the state where Pence served as governor prior to becoming vice president.

The gripe on Pence is old news but the left had to protest anyway:

“During his time as governor of the state of Indiana and now as Vice-President, Pence has targeted the civil rights protections of members of the LGBT community, rejected the Syrian refugee resettlement program, supported an unconstitutional ban of religious minorities, and fought against sanctuary cities,” the students wrote in a statement. “All of these policies have marginalized our vulnerable sisters and brothers for their religion, skin color, or sexual orientation.”

Watch how the crowd boos these losers: