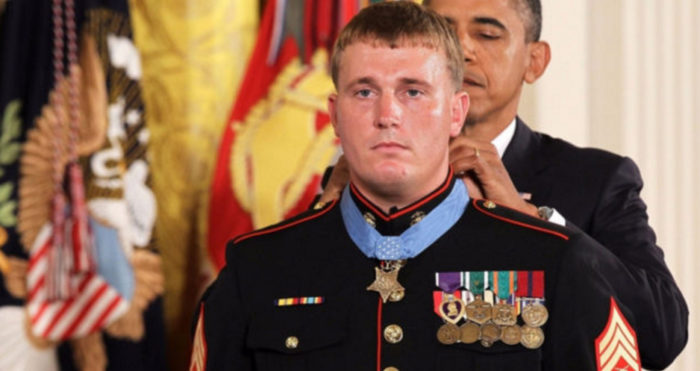 Why do the Democrats wonder why their heiress was rejected? Just one more example of how manipulative and corrupt this entire administration really is.

Dakota Meyer gets the Medal of Honor and later gets told to GTFO because he’s a conservative exercising a constitutional right. Talk about disrespect for a man who went so far above the call of duty, he’s already received the nation’s highest military honor for valor in action against an enemy force.

Dakota Meyer should wear this rejection as a badge of honor. It says he got under their skin, and is living in their heads totally rent free.

The Obama Administration has told a Medal of Honor recipient that he cannot attend the Marine Corps birthday ball, despite an invitation from Marines on the ground in Afghanistan to join them for the celebration.

Medal of Honor recipient Dakota Meyer said he was invited by the Marines in Kabul, Afghanistan to join to celebrate the 241st birthday of the Corps on November 10th. Due to security issues inside Afghanistan, the ball was to be held inside the embassy itself.

The Marine Corps birthday celebrates the creation of the Continental Marines at Tun Tavern at Philadelphia by order of the Second Continental Congress in 1775. The tradition of a commemorative ball  and has been a tradition for more than 90 years. It is the biggest event of the year for Marines.

As arrangements were being finalized, however, the Medal of Honor recipient was told that he would not be able to come. Why? Because Meyer has been an outspoken critic of the Obama administration. More

Michael Moore Makes It To Trump Tower's 4th Floor, Tries To Confront Trump To Ask Him To Step Down