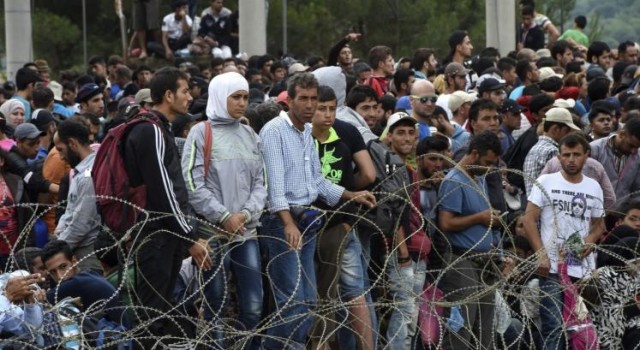 Obama is doing nothing to help America, only further damage it. Hillary will only continue on the same old path as Obama has been on.

OBAMA is changing America by flooding towns with Muslim refugees and illegals from all over the world. Remember that “fundamental transformation” he talked about? Well, here it is:

The Obama administration admitted 2,340 Syrian refugees into the United States in July, almost as many as the record number of admissions in June (2,406), keeping it on track to reach its goal of 10,000 by the end of September.

According to State Department Refugee Processing Center data, since the beginning of FY 2016 on October 1, a total of 7,551 Syrian refugees have been admitted. Of that number, 7,432 (98.4 percent) are Sunnis and 35 (0.46 percent) are Christians, including six Catholics, two Orthodox and one Greek Orthodox adherent.

The remaining 84 Syrian refugees admitted in FY 2016 comprise 50 other Muslims, 20 Shi’a Muslims, 10 Yazidis – like Christians, a minority singled out by the Islamic State of Iraq and Syria (ISIS/ISIL) for persecution – three refugees identified as “other religion,” and one as having “no religion.”

Since the civil war began in 2011 the U.N. High Commissioner for Refugees (UNHCR) has registered 4.82 million Syrians who have fled their homeland. Some 495,000 are accommodated in U.N. refugee camps.

Displaced Syrians include those wanting to get away from ISIS and other jihadist groups, those fleeing from atrocities carried out by the Assad regime – dominated by a minority Shi’a sect that has targeted Sunnis in particular – and its Hezbollah, Iranian and Russian allies, and Syrians simply wanting to escape the chaos and deprivation of the conflict. More