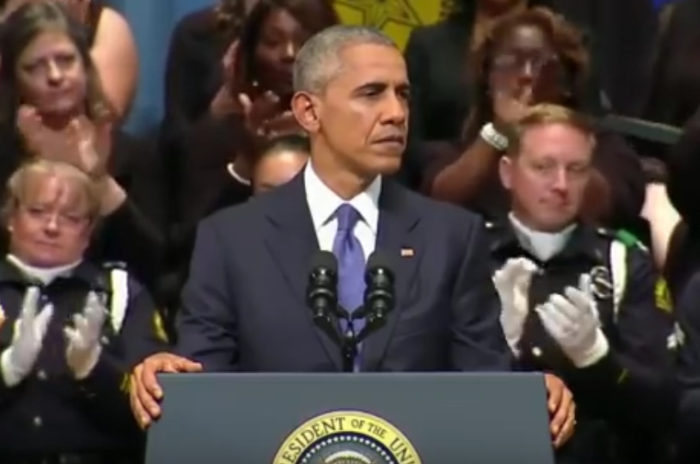 Our sympathies to the grief stricken families, on top of everything else Obama had to stain the memorial service for your loved ones. I can’t even imagine how these poor families must feel. How devastated would you be after this? This man is evil beyond comparison.

President Obama referred to himself 45 times over the course of the speech he delivered Tuesday at the memorial service for the five police officers killed in Dallas last week.

Obama referred to himself twice before finishing his opening salutations and before mentioning the slain officers or their families. After noting the presence of President Bush, members of Congress and Dallas mayor Mike Rawlings, Obama appeared to go off-script.

“Chief Brown, I’m so glad I met Michelle first because she loves Stevie Wonder,” Obama said, jokingly referencing Dallas Police Chief David Brown’s earlier speech in which Brown quoted lyrics from the song “As” in tribute to the deceased. The president looked around the room, pointed at Brown and cracked a grin while the audience laughed at and applauded his joke. “Most of all, the families…” Obama said, proceeding with his speech. More