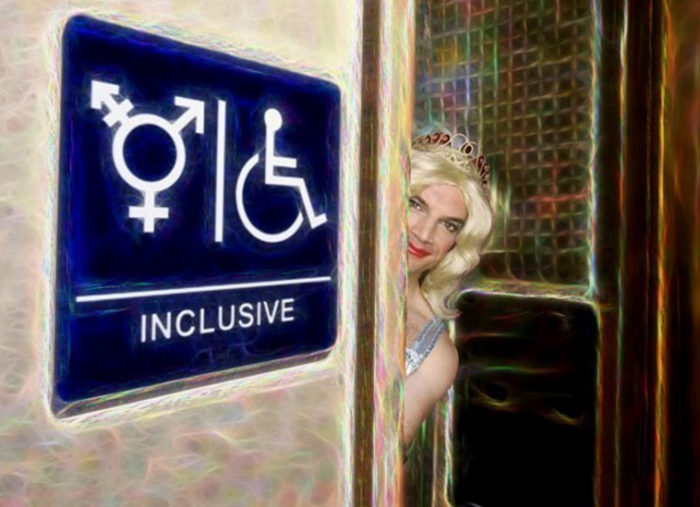 While he was playing golf. I have to wonder if Obama knows that these same rules apply to the White House, and his very own daughters?

Should all women should carry pepper spray around? So if an unwanted man shows up in the bathroom they can give him a good dousing. Would that make him remember what gender he really is?

The Obama administration has ordered 9,000-plus federal buildings across the United States allow biological men into women’s bathrooms, locker rooms and showers in order to comply with the administration’s interpretation of Title IX law.

On Thursday, the General Services Administration, the agency that oversees about 9,200 buildings operated by the federal government in over 2,000 plus cities across the country, issued a bulletin to clarify the nondiscrimination policy in the Federal Management Regulation for buildings under its jurisdiction and control, such as office buildings and courthouses.

The bulletin, which was posted to the Federal Register, states that individuals must be allowed to use the bathrooms, showers and changing areas consistent with their self-proclaimed gender identity.

In its justification, the bulletin cites the Department of Justice, Department of Education and the Equal Employment Opportunity Commission and their extension of the 1972 Title IX provision of the Civil Rights Act to include protections based on gender identity. Additionally, the order cites the The U.S. Office of Personnel Management, which issued a guidance to Federal agencies about the treatment of transgender individuals.

“Federal agencies occupying space under the jurisdiction, custody, or control of GSA must allow individuals to use restroom facilities and related areas consistent with their gender identity,” the guidance reads. “As consistent with guidance by DOJ and ED, the self-identification of gender identity by any individual is sufficient to establish which restroom or other single-sex facilities should be used.”

You Won't Believe What Federal Terror Screeners Are Asking Immigrants