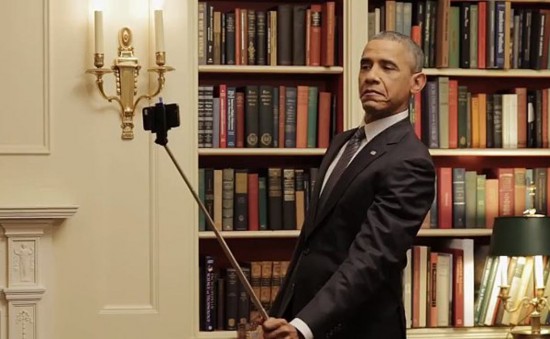 Selfies are only on the Obama’s terms and only with people he deems acceptable to take one with. Only celebrities and prime ministers are good enough for a selfie with the president.

On a recent trip to Asia, President Obama was forced to confront some of the biggest issues of his presidency: rising Chinese aggression, climate change, a rocky global economy.

He also had to deal with a less weighty, but stubbornly persistent problem that has dogged him throughout his second term: the scourge of the selfie.

He complained that patrons pestered him for a selfie at his hotel gym in Vietnam. On a sidewalk in Hanoi, his most enthusiastic admirers spun away from him so they could take a selfie shot with the president in the background.

No sooner had Obama arrived at a U.S. Marine Corps base in Iwakuni, Japan, than he felt compelled to issue an order to the cheering troops: He would shake hands, but no selfies. “Otherwise, I’ll be here all day,” he said.

Obama has complained — with increasing regularity during his final year in office — about the prevalence of the selfie and its intrusion on his personal space. But the president, who has leveraged his image as a tech-savvy and approachable leader to mobilize young voters, has not been willing or able — despite his ample executive powers — to contain the selfie explosion. No blanket selfie ban has been issued.

The upshot: Obama and the humble smartphone have forever altered one of the most iconic American moments. Never again will citizens interact with their president in quite the same way. #ThanksObama.

Before Obama even had a chance to fully develop and set a course on selfies, there were the mini-scandals. The first came in late 2013 when he attended a memorial ceremony for his longtime political hero Nelson Mandela in Johannesburg. At one pointduring the service, Obama squeezed together with Danish Prime Minister Helle Thorning-Schmidt and British Prime Minister David Cameron for a smiling selfie taken with the Danish leader’s phone. More