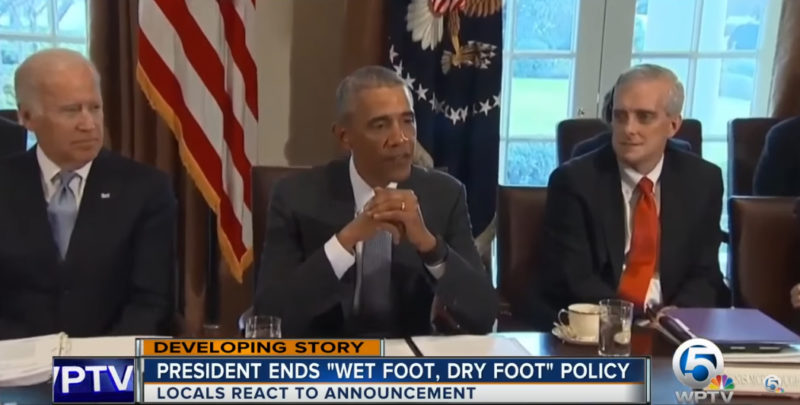 The media’s selective moral outrage is getting pretty old. The hacks in the press need to answer for this.

When Obama ended the “Wet Foot/Dry Foot” policy toward Cubans fleeing communist oppression, thousands of Cubans’ lives were thrown into chaos. Remember all of the protests and phony outrage by democrat congressmen and the mainstream media? Neither do I.

During his last week in office, President Obama repealed a long-standing executive order known as “Wet Foot/Dry Foot,” which allowed all Cubans legally touching U.S. soil to stay here illegally. The objective of the executive order was to give sanctuary to Cubans risking their lives on makeshift vessels trying to sail to the United States and escape the oppressive communist regime that has governed there for over half a century.

The move did not trigger widespread national protests in defense of the Cubans affected, even as U.S. immigration officials – confused by the lack of direction in Obama’s order – detained and interrogated countless travelers possessing legal visas to enter the United States. Many of these were elderly individuals, traveling to visit their children with no intention of stay.

The only activists who spoke up for them were members of the Cuban exile community, who told their stories to local press. Democracy Movement leader Ramón Saúl Sánchez – who the Obama administration threatened with deportation after 49 years in the United States – told Miami’s El Nuevo Herald that the individuals he was advocating for were stuck in airport interrogation rooms, their families panicked and receiving few updates.

“These Cuban travelers have tourism visas. They are being detained or deported,” Sánchez said on January 15. “Those being detained within the airport include people of advanced age, including one blind man, many of them ill.” He added that many elderly Cubans with whom he spoke after being released from interrogation were threatened with being detained in an immigration center, leaving them thinking, “if you’re going to throw me in jail just send me back.” More