Barack Obama crawled out of his hole and trashed President Trump. Calling him out by name, then had the nerve to arrogantly take credit for Trump’s booming economy.

Hey Barack, Do you remember saying that some jobs “are just not going to come back…” & What magic wand do you (Trump) have? Suck it up buttercup because apparently, President Trump found that “magic wand” that alluded you! 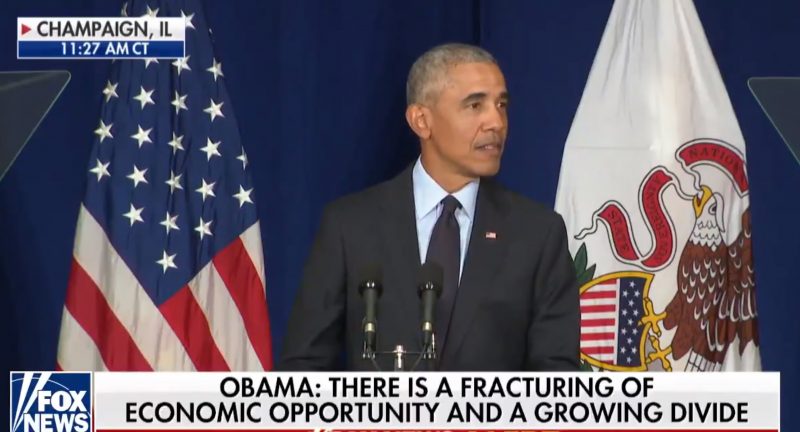 Obama gave a speech at the University of Illinois Friday and arrogantly took credit for Trump’s booming economy.

Barack Obama couldn’t even run a lemonade stand; he is the only president in history to never see a single year of 3.0% GDP growth yet here he is with a smug look on his face giving himself credit for Trump’s accomplishments.

Obama also called out Trump by his name.

“It did not start with Donald Trump. He is a symptom, not the cause. He is just capitalizing on resentments that politicians have been fanning for years,” Obama said.

.@BarackObama: “[Donald Trump] is just capitalizing on resentments that politicians have been fanning for years.” pic.twitter.com/6NxqP9dfcH

Obama then whined about not getting credit for the Trump boom.

“When you hear about how great the economy is doing right now, let’s just remember when this recovery started.”

.@BarackObama: “When you hear about how great the economy is doing right now, let’s just remember when this recovery started.” pic.twitter.com/xnWpiX7KQV

Here are the real numbers…

The US Bureau of Labor Statistics (BLS) announced its August jobs report Friday morning. Unemployment is down to 3.9%, while more people are employed in the US than at any time in history. But the big news is that this century, since the year 2000, more than 20% of all job increases have occurred during the Trump years.

The US GDP for the second quarter accelerated to a whopping 4.1% under the leadership of President Donald Trump.

This is another BIG Trump win.
This doubles the first quarter growth of 2.2%

This is Trump’s economy. Go crawl back into your hole, Obama.

The saddest part is there are still crowds people that still believe this snake when he says he saved the economy.