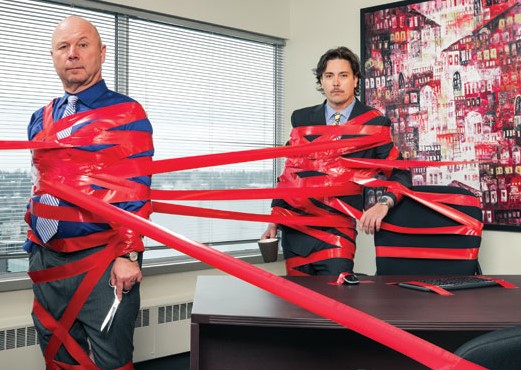 Red tape he has no problem with, but it’s the red lines that make him pee himself.

President Obama’s lame duck administration poured on thousands more new regulations in 2016 at a rate of 18 for every new law passed, according to a Friday analysis of his team’s expansion of federal authority.

The 2016 total was the highest annual number of regulations under Obama. Former President Bush issued more in the wake of 9/11.

The proof that it was an overwhelming year for rules and regulations is in the Federal Register, which ended the year Friday by printing a record-setting 97,110 pages, according to the analysis from the Competitive Enterprise Institute.

The annual “Unconstitutional Index” from Clyde Wayne Crews, CEI’s vice president for policy, said that it was much higher under Obama than under former President George W. Bush.

“The multiple did tend to be higher during Obama administration. Bush’s eight years averaged 20, while Obama’s almost-eight have averaged 29,” said his report, first provided to Secrets. More