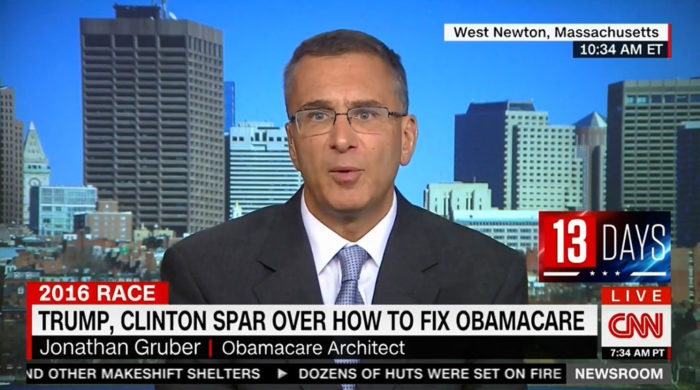 Obamacare is working as designed? And they want to put larger mandate penalties for those who already can’t afford it? And a 22% premium increase?

On Wednesday’s broadcast of “CNN Newsroom,” MIT Economics Professor and Obamacare architect Jonathan Gruber argued that “The law is working as designed. However, it could work better. And I think probably the most important thing experts would agree on is that, we need a larger mandate penalty.”

Gruber said, “Obamacare’s not imploding. The main goal of Obamacare was two-fold. One was to cover the uninsured, of which we’ve covered 20 million, the largest expansion in american history. The other was to fix broken insurance markets where insurors could deny people insurance just because they were sick or they had been sick. Those have been fixed, and for the vast majority of Americans, costs in those markets have come down, thanks to the subsidies made available under Obamacare.”

When asked about the 22% Obamacare premium increases, Gruber stated, “the 22% increase, let’s remember who that applies to. That applies to a very small fraction of people, who have to buy insurance without the subsidies that are available. 85% of people buying insurance on the exchanges get subsidies. And for those people, this premium increase doesn’t affect them. Now, for those remaining people, that is a problem, and that’s something that we need to address, but it’s not a crisis. It doesn’t mean the system’s collapsing. And most importantly, it doesn’t affect the 150 million Americans who get employer insurance, who have actually seen their premiums fall dramatically, relative to what was expected before Obamacare.”

Gruber later state that there was “no sense in which” the law “has to be fixed. The law is working as designed. However, it could work better. And I think probably the most important thing experts would agree on is that, we need a larger mandate penalty. We have individuals who are essentially free-riding on the system, they’re essentially waiting until they get sick and then getting health insurance. The whole idea of this plan, which was pioneered in Massachusetts, was that the individual mandate penalty would bring those people into the system and have them participate. The penalty right now is probably too low, and that’s something I think ideally we would fix.”