Obama and ethics should never to be used in the same sentence. This Director of Ethics was a complete failure under Obama… Well, unless his job was to redefine the word ethics. Good riddance to this bad rubbish!

A lawyer and an ethics director… an oxymoron isn’t it? If you have nothing good to offer your country, the next logical choice is going to work for Soros?

TGP by Joe Hoft: No it’s not an oxymoron but President ‘Obama’s Ethics’ Director has resigned. 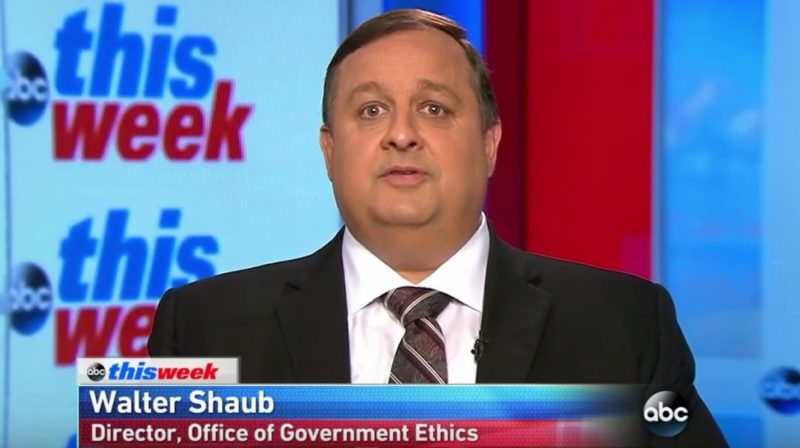 Walter Shaub, was appointed by Obama in 2013 and he resigned last Thursday amid growing unethical acts on his behalf.  The mainstream media (MSM) however reports that Shaub resigned due to “months of clashes with the White House”.  The MSM hides the fact the Shaub was an Obama holdover when reporting about Shaub’s resignation which is unethical reporting by the MSM at best.

Shaub has big plans according to MSM and government funded NPR:

Shaub, an attorney, has accepted a job with the Campaign Legal Center, a nonpartisan organization of election-law experts.

What NPR and the rest of the MSM won’t tell you is that the Campaign Legal Center is nothing but another far left organization funded by George Soros.  The Center boasts many entities for its funding including the Open Society Foundations.  Open Society Foudations boasts that it was established by far left “investor and philanthropist George Soros”.  The Gateway Pundit has reported many times about how far left Soros, a Nazi sympathizer, is behind many sordid activities like Black Lives Matter and at one time was connected to every major riot/protest since the election.

The fact that Obama’s Ethic’s Director, Walter Shaub, is now working for Soros says all you need to know about Shaub’s character and biased ethics activities under former President Obama.

Shaub’s actions also show how unethical he is.

In November, shortly after President Trump won the election the Office of Government Ethics began tweeting at President-elect Trump in a very unethical manner.  It was soon reported that the unethical tweets were coming from none other than the OGE Director Shaub.  Shaub’s tweets berated the President-to-be and challenged him to divest of his assets, which the President did do.

.@realDonaldTrump OGE is delighted that you’ve decided to divest your businesses. Right decision!

Of course President Trump’s actions were never good enough for the Obama-Soros crony.  No matter what the President did, Shaub was disrespectful and hateful in his communications about the President.

The unfortunate thing is that there is so much damage to the democracy that Obama was involved in while President that was left uninvestigated and unchallenged by Shaub.  Obamacare, Benghazi, the Iran Nuclear deal, Fast and Furious, and lies about all these activities were apparently never a problem for Shaub.

President Trump and America is in a much better place with Walter Shaub no longer designating what is ethical while he acts in the most unethical manner imaginable.  Good riddance.