When President Obama’s National Security Advisor Lied, The Media Just Laughed It Off 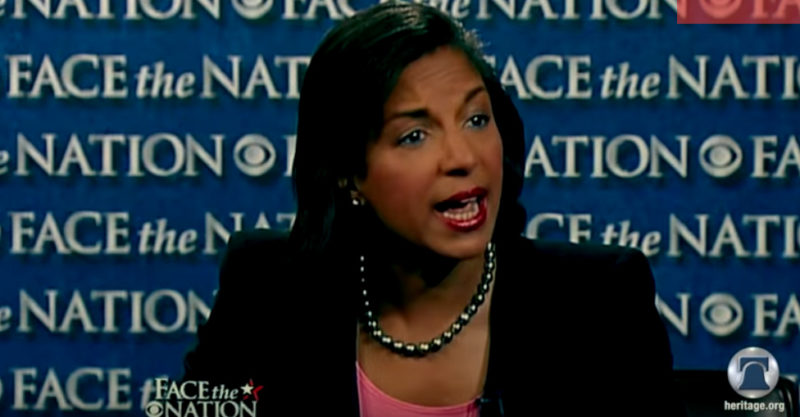 If not for the double standard,they would have no standard at all. The media never even attempted to view Obama realistically, honestly, objectively or critically. Pretty hard to see faults when your lips are glued to their butt.

Nothing matches the audacity of trope by Obama’s National Security Advisor Susan Rice on September 16, 2012. Rice went on several Sunday shows to peddle a story she knew was completely phony…

Buried deep beneath the Michael Flynn hysteria this week was Judicial Watch’s release of newly obtained State Department documents related to the Benghazi terrorist attack on September 11, 2012. One email confirms—again—that the Obama administration knew the day after the attack it was not a random act of violence stemming from an anti-Muslim video. That was the excuse shamefully propagated by top Obama administration officials (including the president himself) and swallowed whole by a media establishment desperate to help Obama win re-election six weeks later.

According to the summary of a call on September 12, 2012 between State Department Under-Secretary Patrick Kennedy and several congressional staffers, Kennedy was asked if the attack came under cover of protest: “No this was a direct breaching attack,” he answered. Kennedy also denied the attack was coordinated with the protests in Cairo over the video: “Attack in Cairo was a demonstration. There were no weapons shown or used. A few cans of spray paint.”

It’s somewhat ironic—galling?—that this email was disclosed the same day the anti-Trump universe was spinning into the stratosphere over Flynn’s resignation as President Trump’s national security advisor. It begs for a little trip down memory lane, to a kinder, gentler time when the media gave a great big pass to another national security advisor in the days after four Americans, including an ambassador, were murdered in Libya by Islamic terrorists under her watch.
Lying to Us Only Matters If We Dislike You

Fun fact: While Trump press secretary Sean Spicer fielded 55 questions on February 14 related to the Flynn debacle, Obama’s press secretary Jay Carney received only 13 questions from reporters on September 12, 2012, three of which were set-ups to blast Mitt Romney’s criticism of the administration after the attack. 55 to 13.

So as we now suffer through yet another patch of media mania, conspiracy theories, and unsubstantiated claims about how Trump hearts Russia, as well as the daily beatings endured by Spicer, let’s reminisce to when the media and Obama’s press flaks spun, deflected—even joked about golf and “Saturday Night Live!”—less than a week after Benghazi. More

When President Obama’s National Security Advisor Lied, The Media Just Laughed It Off