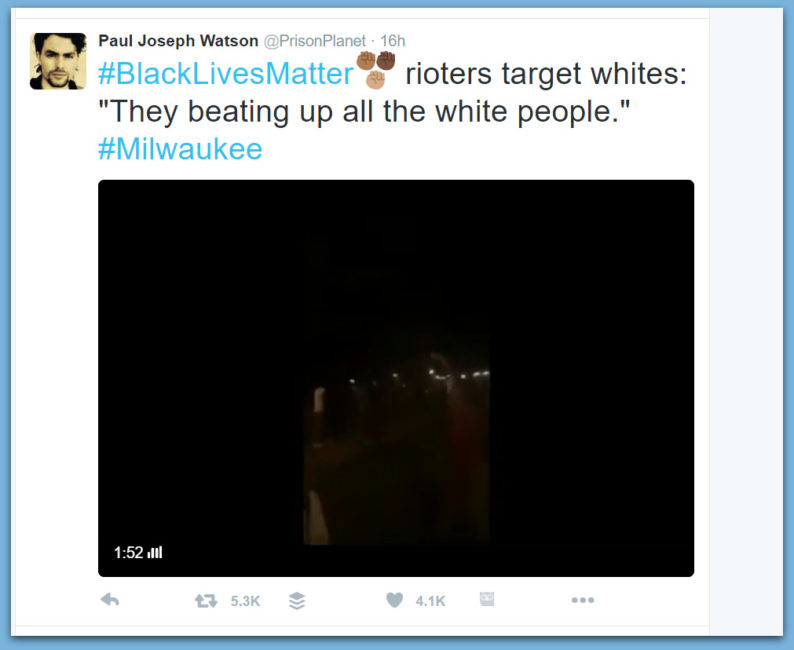 Your tax dollars hard at work. Paid rioters using racism to help Democrats? I wouldn’t be surprised to find out that Milwaukee was specifically targeted because of Sheriff David Clarke has been telling the cold hard truth about Obama & his administration.

TGP: Obama’s Race War Arrives— Obama and Democrats have been feeding this bear for years ever since Obama came into office.
They stoked the fire of racial hatred in Ferguson. And rioters burned down the business district.

As a reward, Obama invited the protest leaders to the White House – several times.

Last night in Milwaukee black rioters hunted down whites like dogs. So this is what “Hope and Change” was all about?

At least four businesses were torched to the ground.

#BlackLivesMatter rioters target whites: “They beating up all the white people.” #Milwaukee pic.twitter.com/G85jnYtd3k

You can’t stoke racial hatred and envy for years and not expect something like this to happen.

The clip shows angry rioters chanting “black power!” before asking “is they white?” as cars slowly drive past.

“Yeah they white!” states someone else, prompting the mob to run towards the vehicle.

“Yeah they white, get their ass!” screams another.

“Hey they beatin’ up every white person!” exclaims another rioter.

The footage appears to show the mob attacking cars and trying to drag out the drivers.

The footage then cuts to an upper floor window before the person shooting the video states, “I think they just beat some white bitch ass for no reason – they bust open the window.” More